Medical Matters: the cultural politics of the body in eighteenth-century Britain 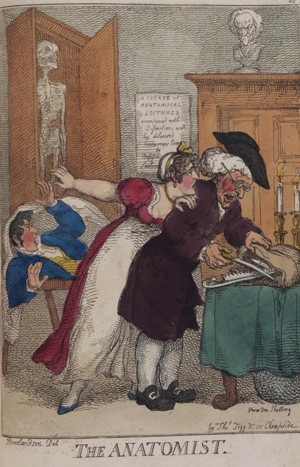 During the eighteenth century, medical accounts of the body often constitute sites of peculiar tension between enlightenment celebrations of progress and older, occult folkloric traditions, and between the rigours of empirical investigation and the necessity of visionary speculation. Medical texts are often marked by political division and debate, as medical advances are heralded as evidence of radical political progress, while also functioning to entrench essentialised conceptions of gender and racial difference.
Our speakers will not only address the medical literature of the period, but will investigate the significance of medical debates in literary, philosophical and political texts. Conference papers will discuss the significance of literary conventions in medical representations of the body, in particular the use of the conventions of narrative, and the highly figurative qualities of medical texts. But they will also explore the way in which medical theories are used to underpin aesthetic, social and political speculations during this period.

The conference has been generously supported by the British Society for the History of Science.

10.45-11.45 Panel 1
Clark Lawlor ‘“The fair ones feel such maladies as these, When each new night-dress gives a new disease”: Thinking Fashionable Disease and Literature in the Eighteenth Century’

Corinna Wagner ‘Pathological Bodies: Medicine and Politics in the Age of Revolutions’

Michael Brown ‘A Theatre of Compassion: Emotion and Affect in Early Nineteenth-Century Surgery’

Registration for members of the University of York is free, but please email cmb14@york.ac.uk to secure your place. Lunch (optional) is £5.00 - please enquire about payment in your registration email.