My group is interested in the development of new methods for the synthesis of functionalised, complex molecules with applications.

End-to-end cyclisation reactions (1 to 2) to make medium-sized rings/macrocycles are typically inefficient. We believe that by designing reaction sequences such that overall end-to-end cyclisation is achieved via cyclisation/ring expansion cascades (3 to 4 to 5) a more kinetically favourable reaction course can be followed. This has been demostrated in our proof of concept study for the atroposelective synthesis of medium-sized rings 8. Expanding upon this idea will be a major research focus for the Unsworth group in the coming years.

Photochemistry and radicals in synthesis

The Unsworth group has recently developed an interest in application of photochemistry and photoredox in synthesis in radical-based processes:

The Unsworth group has a broad interest in catalysis, including asymmteric processes for the functionalisation of indoles:

Important applications across the physical sciences rely on the synthesis of functionalised macrocycles. At present, macrocycles are typically made via the end-to-end cyclisation of a linear precursor, a notoriously difficult and unpredictable transformation; in particular, achieving macrocyclisation (1 → 2, Figure 1a) rather than dimerisation (1 → 3) is a major challenge. The most common strategy used to combat this is to perform the reactions at high-dilution but while successful in many cases, such protocols are generally highly substrate dependent and impractical for large scale synthesis.

Successive Ring Expansion (SuRE for short) is designed to improve the efficiency of macrocycle synthesis by completely avoiding end-to-end macrocyclisation. It is based on the sequential insertion of linear fragments into existing cyclic systems, by coupling a cyclic compound (4) to a linear fragment 5, which can thenrearrange (6), initiating ring expansion, forming a ring enlarged  product 7. A key design feature is the replication of the functionality in the cyclic starter unit in the ring-expanded product (circled), as this means that the same coupling/ring expansion sequence can be repeated, allowing further iterations to be performed in the same way (7 → 9; 9 → 11). SuRE can incorporate a range of linear fragments and can theoretically be repeated indefinitely, meaning macrocycles of virtually any ring size and composition are potentially accessible. 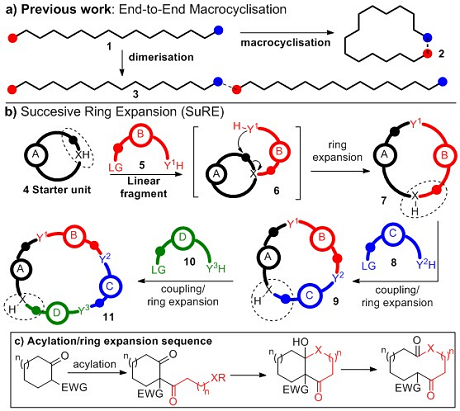 More deatils on this concept can be found in our first publication arising from this project, see: Angew. Chem. Int. Ed. 2015, 54, 15794 –15798. In this paper, the SuRE concept is validated using a telescoped two-step sequence, to generate macrocyclic lactams and lactones from cyclic β-keto esters (Figure 1c).

We are interested in the development of new catalytic processes in which multiple products can be generated from a common precursor through catalyst variation. This work has two major benefits: 1) by generating multiple products from a single starting material, the synthesis of potentially valuable compounds can be signifricantly streamlined; 2) we believe that challenging ourselves to uncover new catalyst selective synthetic methods is an effective way to inspire the discovery of new reactions and deliver new insight in catalytic processes.

The best illustration of this can be found in our 2016 publication entitled: Selective Synthesis of Six Products from a Single Indolyl α-Diazocarbonyl Precursor. The essence of work is in illustrated in the art work below; much as a single light source can be split into an array of colours with different visible properties, for example in a rainbow, we have been able to apply this concept chemically, to generate an array of 6 products with diverse chemical properties from a single precursor.

We are interested in the development of new dearomatising spirocyclisation methods, especially those involving alkyne activation with π-acids and metal carbenoid intermedaites.

Selected recent publications (for a full list of 60, see the York Research database link in the right-hand column)

Will is originally from Coppull, near Chorley in Lancashire (UK). He studied chemistry at the University of Oxford, and remained there to complete his PhD studies in the group of Professor Jeremy Robertson. He completed his PhD in 2010 and then began work at the University of York, first as a postdoctoral research associate in the group of Professor Richard J K Taylor, before being appointed to a Research and Teaching Fellowship in 2013. In 2016 Will took up a Leverhulme Trust Early Career Fellowship to develop new procedures to synthesise functionalised macrocycles and is now the holder of the inaugrual Eleanor Dodson Fellowship at the University of York. His current research interests include ring expansion approaches for the synthesis of medium-sized rings and macrocycles, the construction of diverse spirocyclic scaffolds, cascade reactions and total synthesis. He now lives in York with his wife Hayley and two children Billy and Catherine. 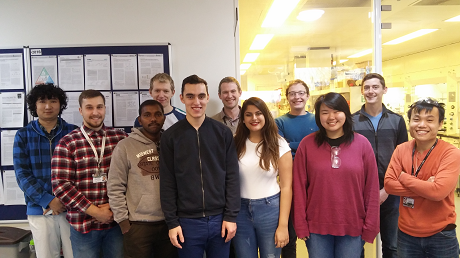 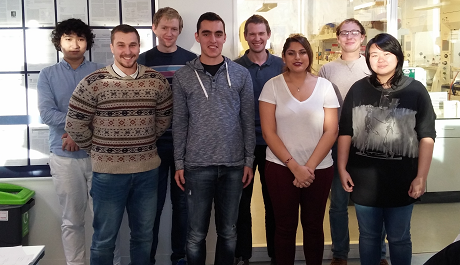 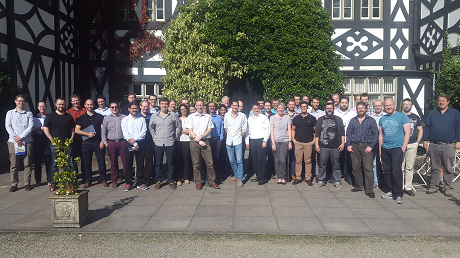 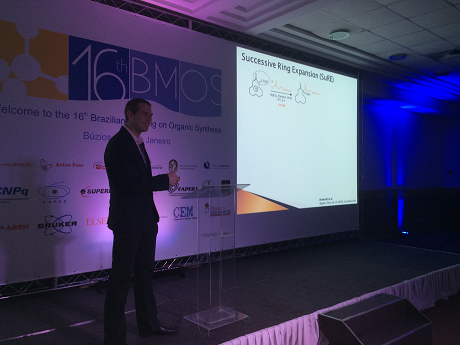 Will presenting his SuRE methodlogy at the BMOS meeting, Buzios, Rio de Janeiro, Brazil