A significant part of our work relates to the development of sol-gel based routes to organically modified silicas. A few years ago we developed a simple clean one-step route to organically modified micelle templated silicas which involves the co-condensation of two (or more) alkoxysilanes in the presence of a neutral amine template. Washing out the template is a simple procedure, and virtually no waste is produced, with template and solvent being recycled.

We have developed a simplified and much more versatile synthesis based on micelle templated sol-gel chemistry. [ D J Macquarrie "Direct Preparation of Organically Modified MCM-type materials. Preparation and characterisation of aminopropyl-MCM and 2-cyanoethyl-MCM" Chem Comm. 1961 (1996); D Macquarrie,D B Jackson, J E G Mdoe and J H Clark "Organically Modified Hexagonal Mesoporous Silicas" New Journal of Chemistry, 1999 23 539] By including organosiloxanes in the synthesis gel, a direct synthesis of high surface area organosilicas with controlled pore size distributions can be made. Varying the solvent can lead to materials with significantly different surface properties.
The use of neutral amines as micellar templates for the synthesis of organosilicas allows a great deal of control over the properties of the final material. The ratio RSi(OMe)3 to (EtO)4Si controls the loading of organic groups in the material - up to 5mmol/g can be achieved, much higher than that possible with conventional grafting techniques. The choice of solvent can alter the pore size, and also the morphology of the material. Control over pore size can influence product selectivity in catalytic systems.

We are investigating the fundamental processes involved in the synthesis of these materials to extend the range of materials available. This involves work based at York as well as fundamental spectroscopic studies carried out jointly with collaborators in Turin. Recently we published details of the synthesis and the processes which occur during the synthesis of the materials, in collaboration with EPR experts in Bucharest (H Caldararu, A Caragheorgheopol, F Savonea, DJ Macquarrie, BC Gilbert, "A spin probe study of mesoporous silica formation via a neutral templating route" J. Phys Chem B, (2003) 107 6032). Their technique involves the use of spin probes which can be introduced to the system with subsequent monitoring of their EPR spectra. Changes in line shape can then be related to changes in motional freedom, which in turn can be assigned to the processes occurring during the formation of the material.

These studies underpin our attempts to control the synthesis of these materials to allow the maximum possible flexibility in terms of porosity, organic incorporation (how much and what types) so that we can develop better materials for catalysis, adsorbency and optical sensors.

The field of Green Chemistry is revolutionising the way we look at chemistry. It is clear that older methodologies must be replaced by newer cleaner techniques which allow us to manufacture the chemicals we need without depleting the worlds resources and in a manner which minimises waste production.

One of the key technologies which is helping to achieve these goals is heterogeneous catalysis. This has been the mainstay of gas phase conversions of petrochemical feedstocks for decades - now it is beginning to demonstrate its worth in liquid phase synthetic chemistry.

My group's research involves the development of novel organic-inorganic hybrid materials which are useful as catalysts for the synthesis of a range of multifunctional molecules.

Primarily, these materials are based on silica frameworks, making use of the stability of Si-O-Si-C units. Much emphasis has been placed on the grafting of organosiloxanes onto amorphous silica. We are investigating the application of our micelle templated systems in a range of reaction types.

These materials have been used to develop novel catalytic systems for a range of reactions, predominantly base-catalysed but also metal-centred oxidation (where the catalyst activates molecular oxygen) and C-C bond forming reactions such as Heck and Suzuki reactions. Sulfonic acids can also be prepared using this technique - these are complex and very interesting materials which are powerful solid Bronsted acids, with potential for esterification and transesterification reactions, where removal of acid catalysts can be a problem.

Base catalysis is a major theme in the group, and we have successfully developed a range of mildly basic catalysts, based on simple amines. These are very efficient catalysts for reactions such as the Knoevenagel and Michael reactions, and for base-catalysed epoxidation of enones.
Stronger bases are being studied, in particular those based on supported guanidines, which should be capable of catalysing several reaction types, as well as being extendable to include chiral bases. This work is proceeding in collaboration with the CNRS in Montpellier.

We are also working on supported palladium complexes, and have developed systems which are active, selective and stable in the Heck and Suzuki reactions, and which also are showing promise in other key C-C bond-forming procedures.

Further applications of the micelle templated materials include high loading peracids which have good thermal and shock stability, and are very efficient recyclable oxidants, which have excellent activity for O-transfer reactions such as epoxidation, Baeyer-Villiger lactonisation and sulfide to sulfoxide oxidation.

Scavenger resins based on polystyrene resins with e.g. amine groups are often used for the rapid purification of solutions in combichem applications. Our high-loading materials can outperform these materials in the scavenging of key electrophiles.

A recent breakthrough has been the development of Starbon®, based on expanded starch [ S Doi, J H Clark, D J Macquarrie, K Milkowski, "New materials based on renewable resources: chemically modified expanded corn starches as catalysts for liquid phase organic reactions", Chem. Commun (2002) 2632] which has been carbonised, and which has properties intermediate between starch and carbon. These properties can be modified by carbonisation. One of the remarkable properties of this material is that it is naturally mesoporous. We have also recently prepared strong solid acids by sulfonation, and are also working on solid bases and supported metal complexes. One of the most interesting aspects of these materials is that they work well in aqueous conditions, allowing us to use environmentally benign media to carry out reactions. [V L Budarin, J H Clark, R Luque, D J Macquarrie, "Versatile mesoporous carbonaceous materials for acid catalysis". Chem Comm, 2007 634]

Non-catalytic applications of these materials are also of interest, such as scavenger resins with extremely high loading, and optical sensors. 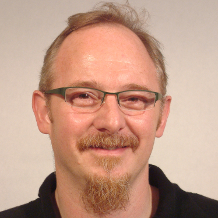