The Liquid Crystal Group is involved in the research and development of a wide variety of self-organising and self-assembling materials which exhibit liquid crystal behaviour. Unlike conventional materials which display three states of matter, liquid crystals exhibit four. It is this Fourth State of Matter that exists between the solid and the liquid states which is our prime focus of research. Many of the materials we design and create are destined for use in a wide spectrum of high technology applications, encompassing large area flat panel displays, microdisplays, sensors, imaging devices, biomedical materials, surface coatings, and smart adhesives. The following sections describe some of our current areas of research. 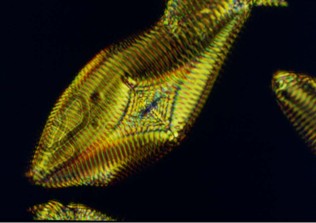 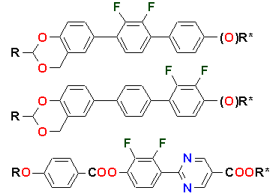 Liquid crystals with giant-sized, discrete molecular structures combine the unique traits of the self-organisation of discrete low molecular weight materials with those of polymers in their ability to form secondary and tertiary structures. Furthermore, super- and supra-molecular liquid crystals exhibit a variety of physical properties which make them attractive for applications in the fields of nanoscience, materials and biology. They offer a very elegant and effective way of adding functionalisation together with an exquisite and unprecedented level of control of the precise nature and location of specific functionalities and overall molecular architectures, as in proteins. As a consequence, the initial interest in super- and supra-molecular liquid crystal synthesis has shifted towards functional dendrimers because of the latter’s rich supramolecular chemistry and self-assembling properties. The very properties of precise control of functionality and molecular architecture are also essential ingredients in the molecular engineering of liquid crystals for controlling and fine-tuning the physical properties that ultimately define the self-organising processes that lead to mesophase formation. Thus, super- and supra-molecular liquid crystals provide unique materials for the study of the structures and properties of self-organising and self-assembling processes. For example, with Dr Isabel Saez, our recent work on Janus liquid crystals has led to novel materials of molecular weights in the region of 4000D, and which behave similarly to low molar mass materials, but with liquid crystal phases existing around room temperature. 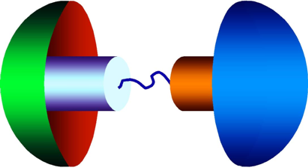 Design of a Janus Liquid Crystal

Apart from displays, many biological structures and biological compounds/materials are directly linked to the science of liquid crystals. Biological membranes are essentially 2-D lamellar bi-layer mesophases composed of phospholipids, glycolipids, and cholesterol which themselves can exhibit liquid crystals formed upon heating or mixing with a solvent such as water. Many proteins and even the B-form of DNA are also mesomorphic. Indeed biological structure has been linked with liquid crystallinity for over a century or more, dating back to the original investigation of liquid crystal properties of myelin structures found in nerve cells. This research activity of the Liquid Crystal Group, in collaboration with the Universities of Lyon and Rennes, is focused on the liquid crystals properties of biological materials with particular reference to glycolipids and phospholipids. Model materials are prepared and their self-organising properties investigated. Typical glycolipids investigated include cerebrosides and gangliosides, and synthetic systems based materials found in the membranes of archaebacteria, see below.

A relatively new direction of research for the Liquid Crystal Group is into the area of bio-medical materials. One involves a collaboration with Dr Liney at the MRI Centre at Hull Royal Infirmary and Professor Bevas at Princess Royal Hospital on the development of imaging gels for use in 3D dosimetry in the radiotherapy treatment of cancer. Pre-polymer treated gels have been designed as artificial patients or phantoms, so that they can be written on by a high intensity X-source. The ensuing photopolymerisation reaction creates a polymer web, the extent of which can be read by MRI or optical scanning methods, thereby creating a 3D dosage profile for the X-rays delivered by linear accelerators (LINACS) used in radiotherapy treatments.

In addition to work on liquid crystals, in collaboration with Dr Alan Hall, research on the synthesis and characterization of polymeric systems has created a number of novel adhesives and coatings. For example, the photo-initiated cyclopolymerisations of 5-, 6- and 7- centre dienes are of current interest. We find that substituted dienes can be cyclopolymerized in sunlight or by the use of a low-power UVA sunlamp of broad spectral range. Unless activated by suitable electron withdrawing groups the cyclopolymerization can often be slow and incomplete. However, when suitably activated the polymerization rates can approach those for acrylates. In particular diallylamine, its quaternary salts, which can often be obtained as ionic liquids, and diallylamide, can be subjected to fairly rapid photocyclopolymerization to give robust coatings and adhesives. This discovery augments, and gives a different dimension, to the acrylate and methacrylate monomer and polymer systems that are already commercially available, see below.

Although the Liquid Crystal Group is concerned with the development of new information technology devices, it also has a concern for the environment and the recycling of devices. However, it is not enough to destroy devices and only recycle some of the component parts. Rather there is a need to aid the recycling process via the development of smart de-manufacturing processes so that maximum use can be made all of the components, even down to the level of coatings and films. In the case of LCDs, through the support of the DTI, we are examining methods of decommissioning devices so that they can be easily de-manufactured, thereby yielding easy access to the component parts of the device, including the liquid crystal mixture itself. Re-use of the LC formulation in re-manufacturing process leading to new applications is one of our objectives.

The Liquid Crystal Group is also involved in Public Awareness of Science, contributing talks and demonstrations at a variety of public events, and schools lectures. Many training courses in the study of liquid crystals are also given. Liquid crystals give spectacular images in the polarized microscope, and many of the Group’s photomicrographs are used in journal and book covers. Collages and covers, see below, have been used in art exhibitions and to illustrate scientific articles. 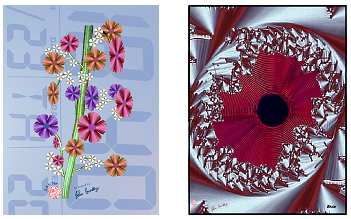 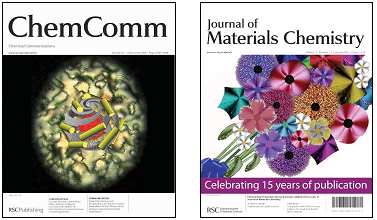 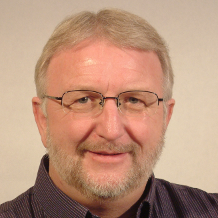