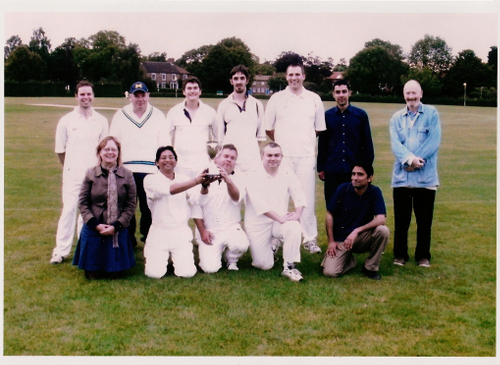 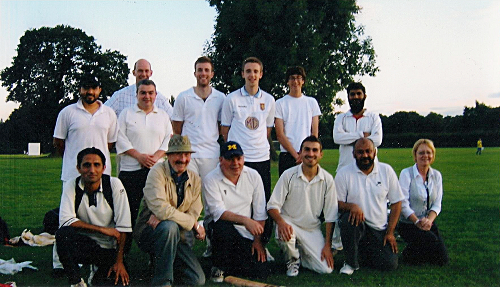 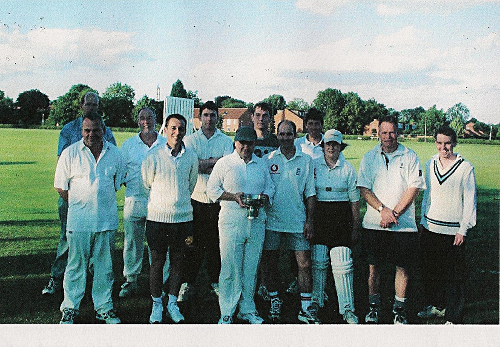 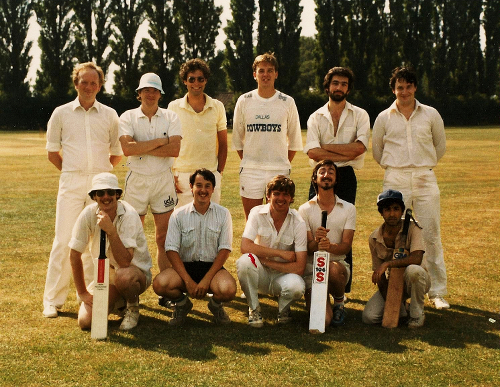 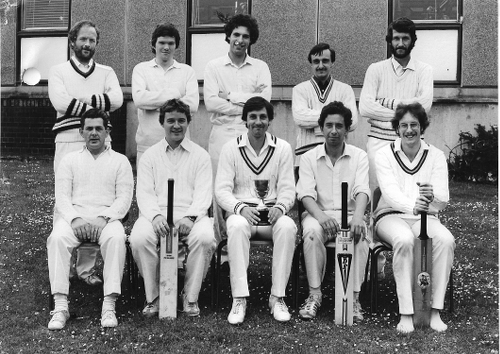 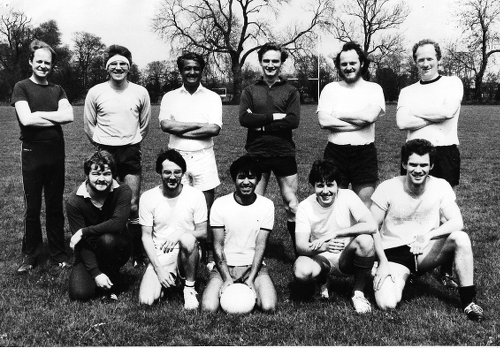 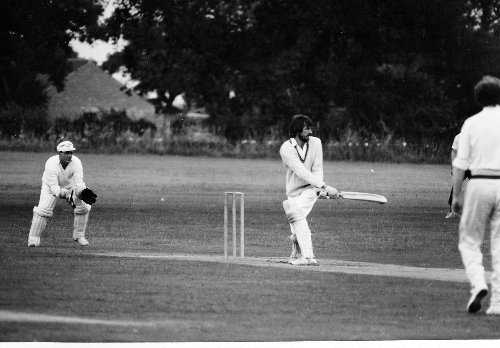 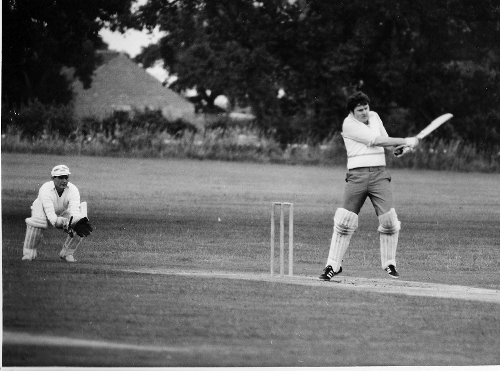 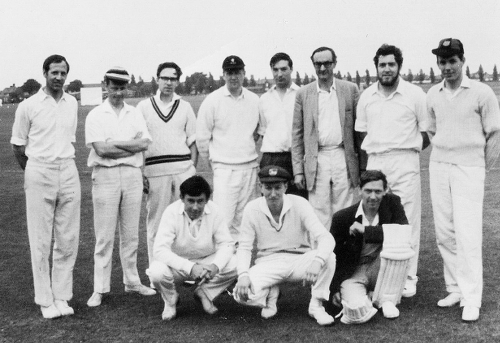 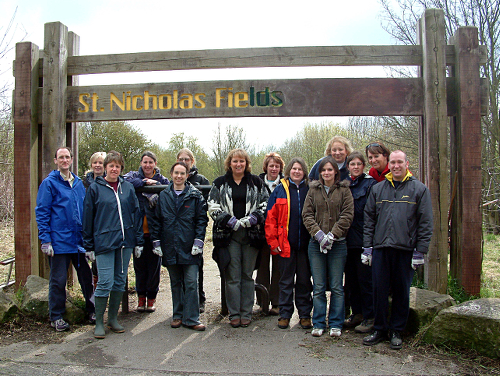 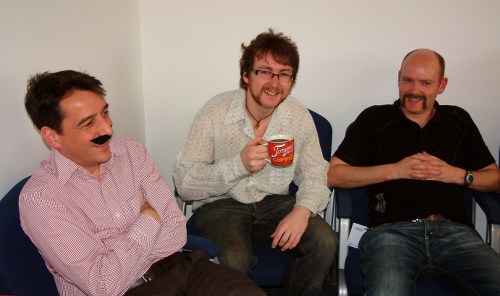 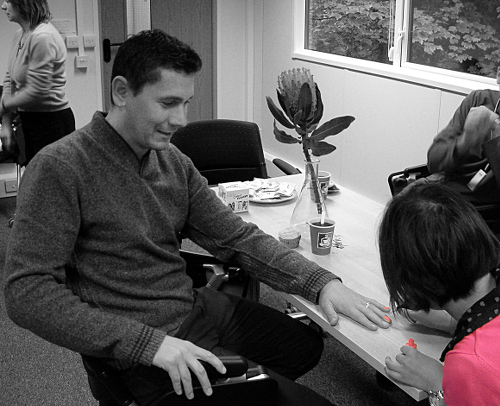 It was three years since Chemistry had won the coveted 'Tin Pot Trophy' in 1984. Having lost early in the season to the Education XI, it was crucial that Chemistry won all their remaining five fixtures to have any chance of winning the league. But the team was going through one of its regular three yearly overhauls with Richards, Inchley, Taylor, Haddleton and Parry all departing and at least five new players in their first season. Plus Justin Bryans, the opening bowler in 1986, fast and very effective, was on holiday. But Chemistry had been fortunate to have Simon Morris an undergraduate who played for the [University] 1st XI working in Teaching Labs over the summer. Ben Francks whose department had no team, was a useful bat and Uma and Indian post. doc. who claimed to have played for a University side in Delhi (!) were also in the side. There was Tony Wilkinson a tall young lecturer in Guy Dodson's group often a source of talented cricketers and Craig Jones and Simon Duckett two first year research students. Jones had taken five wickets in his first two matches and Duckett had scored 30 against Economics.

The Computer Science captain, the spectacled, tall and gangly Jim Briggs won the toss and elected to bat. Jim was famous for creating the electronic scoreboard at Headingley featured on the front cover of Mike Brierley's Phoenix from Ashes. He had a high opinion of his own skills and could be a prickly opponent. Even other members of the Computer Science team, such as the long-suffering Andy Wellings, didn't share that opinion. The Chemistry team generally left him in no doubt of how high he ranked in their estimation. However on this evening Computer Science undoubtedly had the better of the first 20 overs. Morris and Jon Stell kept things fairly quiet for the first five overs without making any breakthrough. Wellings and a newcomer Crosby put on 27 without any alarms. Lindsey, Jones, Belt and Wilkinson all proved rather expensive particularly against the aggressive Wellings who carved his way to 78 not out in the 20 overs. Jones took the only wickets disposing of Crosby (22) and the dangerous Galloway (8) with the scores on 67 and 81, but with Hamilton (18 not out) joining Wellings for the final six overs the score reached 133 for 2. Nowadays that would be nothing special in a 20 over match, but in 1987 a par score was about 100 so anything above 130 was  quite memorable.

Chemistry rarely scored more than 120 even against the weaker teams in the League. Wellings hit 4 × sixes in his innings. It would be 1994 before Chemistry, who were then the most successful side in the League, had a player score a century, in 1987 the record score was 76.

Chemistry realised they were going to have their work cut out to get anywhere near the Computer Science total. Initially things went well. The Chemistry team in 1987 had some real fighter. After starting by facing a maiden over, the often stodgy and pedestrian Simon Belt kept the score ticking over, knowing he and the scampering Naji Eapen had to maintain six runs plus per over. They had progressed to 44 off 7 overs when to his consternation, and the delight of the fielding side, Sajii hits his own wicket with his bat. Disaster. Sajii was replaced by the angular Teaching Lab casual Simon Morris, who kept up the rate so that at the half-way stage of 10 overs Chemistry were 70 for 1 - on target. But as so often happens when chasing a high total, the next five overs saw a flurry of wickets. On 86 in the thirteenth over, Morris was caught behind off Wellings, what a night he was having, for 27. Two runs later the Delhi star Uma went for an impossible single and was run out for two, 88 for 3. Francks, who looked a class bat, was unlucky to be stumped in the same over (fourteenth) for just four and off the bowling of the increasingly irritating Jim Briggs, 92 for 4. Then to complete Chemistry's misery, the first ball of the next over brought the prized wicket of Belt, whilst he was at the crease Chemistry still had hope. He was caught by Briggs of course at his favourite position of point, off the bowling of Wellings again - 94 for 5. There was just a glimmer, 39 needed off 5 overs, not impossible. With two new batsmen, Wilkinson and Nick Owen, a colourful graduate from the James Clarke group, together 12 runs came off the next 9 balls, but on 106 Wilkinson fell just as Francks had, stumped Galloway bowled  Briggs. Two wickets for Briggs and he was getting unbearable. Twenty-seven needed off less than 4 overs as Simon Duckett, impossibly tall and pads just reaching his knee caps, strode out to join Owen. Another 12 runs came, in a mad cap, partnership, off just 7 balls, with Wellings for once taking some stick from Duckett and Owen becoming more cavalier. But in the eighteenth over this proved his undoing, run out going for another impossible single, off the returning Dillistone, Briggs already planning to save the crucial last over for himself, nothing if not confident. 118 for 7 and 15 still needed off 2 overs and 3 balls, perfect symmetry, 15 runs off 15 balls. Duckett drives for 2, the pressure gets to Dillistone who bowls a wide, but then more trouble as the rotund Jones hacks at a half volley and is caught, yet again, by Briggs off Dillistone. It's down to the wire, Chemistry are 122 for 8. Jon Stell emerges to join Duckett who looks quietly, whilst Lindsey the number 11, on the boundary, is quietly praying he won't have to bat.

It's simple, 12 needed off 2 overs, 12 off 12 balls. Computer Science don't have to get anyone out, they just have to stop the 12 runs. If the scores are tied Computer Science will win having lost fewer wickets. Dillistone, Wellings and Briggs have and over each left. Commonsense would dictate that Wellings who can do no wrong tonight, should bowl the last over, which would mean Briggs bowling the nineteenth. But no, Wellings steps up to bowl, Hmmm. Duckett and Stell do their best, they know Lindsey simply can't bat, so they try to score waiting for the bad ball. But it doesn't come. Wellings goes for just 3 singles and 2 precious byes in his over. 125 - 9 needed off the last 6 balls. Dillistone has 1 for 16 off 3 overs, Briggs has 2 for 25 off 3 overs - who bowls? Briggs does, of course he does, he's the captain. Gentle off-spinners bowled by an ungainly academic who is at least 6 foot 3, but they do turn - a bit. Jon Stell is facing, first ball, smacked into the covers but only one, 8 needed off 5. Duckett faces, he misses the ball completely, shouts of delight from the Computer boys. Next ball, the third, is again a single. It's gone, nobody on the boundary can believe we've got so near and blown it, 3 balls to go 7 needed. Stell faces, it's all to much, Briggs is chucking pies and neither batsmen can connect, Stell misses. Galloway takes it close behind the stumps. It's over, 2 balls, 7 runs, 2 boundaries maybe? The last boundary was one nick Owen hit 3 overs ago. Ball 5, Stell smashes it down the ground but Briggs has his long-off back and it's just another single. One ball to go, Chemistry need 6. There hasn't been a six in the entire Chemistry innings. We're on the edge of the square on Oak Tree Square (so called because there's an oak tree on the edge of the cricket pitch just inside the boundary) and Duckett has his back to the Golf Club. Briggs is bowling from the 'Heslington Village end' towards Fulford. Chemistry need a six. Briggs bowls, of all the pies Briggs has bowled this is the juiciest. It's tossed up invitingly just outside off-stump, slightly over pitched. If you wanted somebody to play a lofted cover drive this would be the ball you'd bowl. Maybe in the back of his enormous brain, in the box marked 'off-spinner', Briggs fondly imagines he can ' beat him in the flight', that's what spin bowlers talk about. But Briggs has just thrown up a delightful, slow, half volley. Duckett leans forward slightly and plays the most beautiful cover drive he's ever played, maybe the only one he's played, the shot all mediocre middle-order casual cricketers dream of playing. Perfect, the ball flies off the middle of the bat, it soars into the evening sky. All 22 players hold their breath, maybe the whole of York holds its breath. The ball flies in a perfect arc, over the edge of the square, over the boundary and with a slight swish falls to the ground a good 15 feet over the white line. The Chemistry team goes berserk, it's a six! Duckett's hit a six, we've won. All the accumulated pressure and tension and certain knowledge of defeat is blown away in a wild frenzy of delight. All except for one person , Briggs. He's standing there in front of me, pointing accusingly at the oak tree, 'It's not a six, it hit the tree, it's only a four. You know the rules. It hit the tree, it's only a four, we've won.' And he repeats it over again.

And now I realise what the noise was, that slight swish. The slight swish was the ball hitting the outermost leaves of the outermost branches of the oak tree. The oak tree that stands inside boundary on Oak Tree Square, and because of where it stands there is a local rule that if the ball hits the tree it's a four. The rule is there so that if the ball bounces back off the trunk of the tree you can't be caught off the trunk, so that if it bounces back onto the outfield, which it sometimes does, then the tree can't be like an extra fielder, you can't pick the ball up and throw it back to the keeper, it's a dead ball. But this was different, the ball didn't bounce back from the trunk, it clipped a branch on its way over the boundary for six. I'm furious. It's a six. Even members of Briggs' team, including the long suffering Andy Wellings are starting to have doubts. There are quiet suggestions of 'oh come on Jim'. It was a six. But Briggs will have none of it. He lives by the rule of law. It hit the tree, it's a four.

The aftermath does none of us any great credit. We both demanded a ruling from the Sports Centre, who we felt were the Supreme Court for University sport, and the ruled in favour of Computer Science.