Turning the phage on crop wilt

Researchers at the University of York have launched a major new study that could pave the way to fight a disease that decimates some of the world’s major food crops - without the use of pesticides. 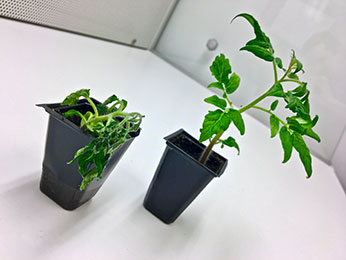 The scientists have been awarded £1.1m to uncover how pathogen-specific viruses called phages could be used as precision tools to control plant pathogenic Ralstonia solanacearum bacterium in the soil.

Pesticides that are currently used to fight the bacterial wilt disease caused by the bacterium often cause collateral damage to beneficial microbes that play a crucial role in plant productivity and soil health.

Bacterial wilt disease affects several crops including tomatoes, potatoes and banana. There is currently no efficient method of control and as a result the disease causes major economic losses around the world.

Dr Ville Friman, from the Department of Biology, says: “Phages form a crucial part of natural microbiomes in the plant rhizosphere. However, they have received less attention compared to bacteria and their role in complex microbial communities is less well understood.

“One particularly beneficial attribute of phages is that they are highly specific to their ‘host’ bacteria. This makes them ideal ‘weapons’ to solely target the pathogenic bacterium leaving beneficial microbes unharmed. This innovative approach could reduce global crop losses to this pathogen.

“Targeting only the pathogen is also important for boosting natural plant immunity: several studies have shown that plant innate immunity is stimulated by the presence of diverse microbial communities, which are often harmed by the excessive use of pesticides.”

Co-researcher Dr Andrea Harper added: “The expertise in plant and pathogen biology makes University of York an ideal place for the proposed research. Moreover, links with government and industry experts will enable us to gain a holistic understanding of how phage, pathogen and plant interact and identify the best approach to apply this knowledge in the field.”

In a recent study Dr Friman collaborated with Nanjing Agricultural University to investigate the role of phages in controlling the notorious pathogen. Their research showed that using phages in specific combinations reduced the incidence of disease by up to 80 per cent.

The new project will build on this work and will use a combination of genomics, transcriptomics, ‘digital organisms’ and experimental evolution to better understand the underlying mechanisms of phage-pathogen interactions in the context of plant disease and immune response.

The study is funded by a £1.1m grant jointly by UKRI, Defra, and the Scottish Government, under the Strategic Priorities Fund Plant Bacterial Diseases programme, into the role of phages in controlling the notorious pathogen.