Advance HE's Athena SWAN Charter was established in 2005 to encourage and recognise commitment to advancing the careers of women in science, technology, engineering, maths and medicine (STEMM) employment in higher education and research.

In May 2015 the charter was expanded to recognise work undertaken in arts, humanities, social sciences, business and law (AHSSBL), and in professional and support roles, and for trans staff and students. The charter now recognises work undertaken to address gender equality more broadly, and not just barriers to progression that affect women.

The Department of Biology has held an Athena SWAN award since 2006 (Silver in 2006, Gold since 2014). It was the first Biology Department in Britain to receive a Gold award.

Our ethos is to support all staff and students to reach their full potential.

We believe that poor workplace practices disproportionately discriminate against women, and that good practices benefit all and allow all our staff and students to reach their full potential.

International Women's Day - 6 March 2020  As a department we wanted to celebrate the achievements of all the women who have contributed to our area of expertise. To celebrate this event staff and students nominated female biologists who had been an inspiration to them and we held a coffee and cake session on Friday 6 March to unveil the line up.

Becca Neale is an Apprentice Mechanical Workshop Technician in the Biology Department. Read about her experience as an apprentice.

Find out about the action plan that we committed to as part of our Athena SWAN Gold Award application in 2018:

We are especially proud of the following impact made since our Silver award in 2006:

1. Sustained success in increasing the number of female academics
Since 2014, our AS activities have increased female academic staff from 28% to 35%. Increases are most pronounced for lecturers, where female lecturers have increased from 28% to 41%, associated with our actions to increase the number of applications from women, e.g. through revised candidate briefs (resulting in a 7% increase in applications from women for lectureships), having observers at shortlisting meetings (Smith et al. BioScience (2015) 65: 1084-1087), and a culture of regularly assessing the gender split of shortlists.‌‌ 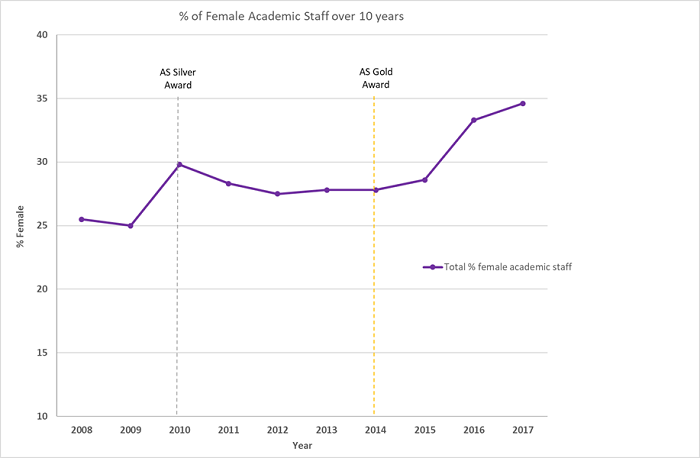 Our actions to proactively encourage staff to apply for promotion, revised PDRs, and greater transparency in the promotions process, has resulted in more women being promoted. Our actions have resulted in 89% of females successfully applying for promotion in the last 7 years compared to 27% previously, and we have removed gender bias in higher success rates that previously favoured men.

We have stemmed the career pipeline leak of females from UG to PGR (both now ~60%F), and from Researcher (48%F) to L (41%, was 28%), that we had recognised as a crucial career pinch point, through our actions to support PDRA careers, and improved recruitment practices.

We have hosted and given seminars at other Institutions to discuss our Athena SWAN journey ‘going for gold’, resulting in 13 Institutes getting AS departmental awards (including two 2 Gold awards – Liverpool and John Innes Centre).

Thank you so much for sparing the time to visit. Your talk was great - pitched perfectly. It has already sparked several emails suggesting things we could do. I especially valued having time to speak with you more generally about gender and how you have approached things. You've given me some good ideas - thank you."

4. Raising the profile of women in Biology at York

We are immensely proud of our successful women: our former HoD, Professor Deborah Smith OBE, became Pro-Vice-Chancellor for Research in 2014. Maggie Smallwood, a member of our PSS, was given an international accolade in 2016, and featured in Il Bioeconomista as one of eight women who have distinguished themselves in the bioeconomy. We hope these successes will inspire the next generation of women scientists.

But there is more to do, and we look forward to implementing our ambitious new action plan developed in 2018 which will continue to drive forward our gender equality agenda and AS principles.