Royal Philharmonic Society Prize-winning composer and singer Stef Conner combines scholarly interpretation and imaginative reworking of ancient musical evidence to create new compositions that engage with the deep past. She studied music at the University of York, graduating with a starred first and going on to complete an AHRC-funded PhD in composition with Bill Brooks.

In 2008, she joined the Mercury Prize-nominated folk band the Unthanks, whose raw and honest approach to musical storytelling deeply affected her style. From 2013 to 2015, she was fortunate to be the first Composer in Residence with the charity Streetwise Opera, which uses music to help homeless people make positive changes in their lives. In 2014, she was named in the 'Music-Makers' category of the Evening Standard's '1000 Most Influential Londoners' list.

From 2017 to 2019, she undertook a Leverhulme Early Career Fellowship at the University of Huddersfield, exploring experimental Very Early music performance. During this fellowship, she presented her practice research as a Visiting Scholar at the University of Yale and a guest lecturer at various UK institutions, including the Universities of Cambridge and Newcastle.

Her compositions have been released on Naxos, Delphian, and Discovery Records, published by the University of York Music Press, and featured on television and radio, including BBC Radio 3's World on Three, the Early Music Show, and In Tune; on the BBC Radio 2 Christmas Special and the Arts Show with Jonathan Ross, as well as BBC Two's 'Great British Railway Journeys.' Her work has also featured in print media, including the Guardian, Observer, Froots Magazine, Newsweek, and New Scientist.

She has had the pleasure of collaborating with many excellent ensembles, including the City of Birmingham Symphony Orchestra, the Philharmonia Orchestra, the London Philharmonic Orchestra, the Ligeti Quartet, Juice, Blossom Street, and Queen's College Choir, at venues including the Royal Festival Hall, King's College Cambridge, St John's Smith Square, Cheltenham Festival and Huddersfield Contemporary Music Festival. She currently sings with Sequentia Ensemble for Medieval Music (directed by Benjamin Bagby) and recently formed the duo LoToS Ensemble, to perform music from antiquity with the aulos-, pipe- and flute-player Barnaby Brown. 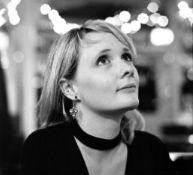