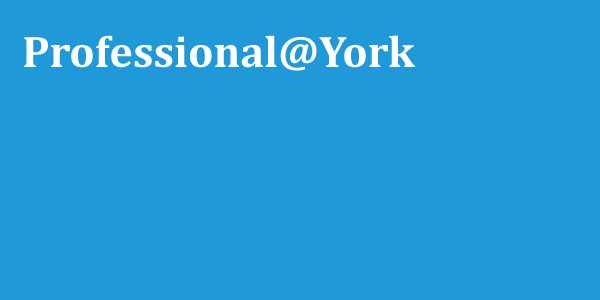 Nominations are now open for the Professional@York Awards

This is your chance to shine a light on those individuals and teams who have gone that extra mile.

Nominating a staff member or team

To nominate a staff member, fill in their details, select the appropriate award and complete the three set questions. (The same for every category). You will be asked for your details at the end of the form and to confirm the individual is eligible for an award. All staff and students can nominate staff and the deadline for nominations is Friday 12 October.

Taken from an Project of the year nomination

Jo has been instrumental in establishing a Staff MHFA Network to provide a 'first aid service' for staff in distress and provide a 'signposting' service towards resources and professional help. Since Jo attended the training in December 2015 she has trained forty people in full Mental Health First Aid and one hundred and ten people on the three hour MHFA 'Lite' course. The training was noted in the Vice Chancellor's report on student mental health and has become part of the University's action plan to respond to the problems with student mental health. The training has since been noted by the UEB and is to be hoped that all academics who supervise students will have the training. This work grew out of the Health and Wellbeing Project, led by Jo's particular interest in work-related stress and staff welfare.

Taken from an Unsung hero nomination

I am making this nomination because Andy is a very modest person who always deflects praise from himself, but who gives so regularly of his personal time to attend at the University to help sort out urgent situations that may otherwise impact negatively on the University and its activities. Few people within the University apart from his work colleagues realise how often Andy does things like this and the potential importance to the University. Andy is one of those behind the scenes people that work so hard to make sure the heat and lights stay on and the working and living environment for staff and students is maintained so the University can continue to function how it should. He is an exceptionally reliable and dedicated person on which the University so often depend.

Taken from a customer service nomination

It is unusual to encounter a team who ALL perform at a consistently high standard, but in all my regular dealings with the team at the Hub Cafe, I have never once had a bad experience. Catering can be a thankless job when it is only recognised when something is wrong or missing, so I think it is very important to acknowledge this team as exceptional. Each one of them goes above and beyond to make their service special. Even with increased pressures at busy times of year and with limited staff, they maintain the quality of their service and food. Each and every one of them deserves this praise and recognition.

Taken from a Support to research nomination

I believe that because of Jo's support, my ERC grant proposal was a more accessible piece of writing and that her help contributed significantly to the grant passing step 1 and my being invited to Brussels to interview for stage 2 (only 20% of proposals reach this stage). More widely, her impact on research in the department has been huge. The support offered by Jo, has relieved staff time of project administrative duties, allowing them to focus on producing world-leading research. I believe she was a huge part of the department being placed fourth of all Archaeology departments in the last REF, and second for impact. I have worked in two other institutions in the UK and met with no one who matches Jo in their knowledge, efficiency, dedication and support for research. She is a fundamental part of the research success in the department and an asset to the University.

Winners will be decided by a panel of judges, consisting of representatives from across the university community.

Winners will be announced at the Professional@York award ceremony on Thursday 13th December.