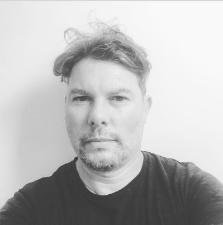 How can Augmented Reality help bridge the gap between classroom and remote science learning for Primary Schools?

The aim of this project is to explore how Augmented Reality (AR) can be used in a
supporting role to address challenges facing primary science education. In particular,
the project will explore AR’s ability to overlay relevant digital information into a student’s home environment can bridge the gap between classroom and remote school science learning (e.g. homework, outside). The project will explore using design methodologies that take advantage of AR’s specific qualities as a medium, while remaining practical in the context of primary science education.

Warren began his career as a ‘Virtual Set Designer’ developing 3D virtual environments for television – this included working on the first children’s interactive television programme, BamZooki. Overtime, he transferred into the BBC 3DFX department concentrating on 3D motion graphics and art direction whilst achieving several PROMAX awards and nominated for an Emmy Award. After several years, he set up his own 3D creative company (WAK Studios) working on commercials and visualisations for companies such as WWF, SKY, FELLOWES, NHS and many more. During this period, he established WAK Educate working alongside education to teach both primary and secondary schools new forms of 3D technologies and served as a Member of the Secondary School Education Panel for Autodesk producing online STEAM curriculum for schools in the USA and UK. Warren now lectures at York St John University and is the programme leader for all postgraduate design courses.

2019 - Literature Review based on 'How can Augmented Reality help bridge the gap between classroom and outside science learning for Primary Schools at Key Stage 2?
https://www.researchgate.net/publication/334171139_USING_AUGMENTED_REALITY_FOR_PRIMARY_SCHOOLS_SCIENCE_EDUCATION