PhD Candidate in Archaeology and TFTI

Plays and Performance in the Country House: The 'Bijou' Theatre at Chatsworth

This interdisciplinary project explores the Chatsworth House theatre, an exceptionally well-preserved and nationally-significant example of a late-nineteenth century private theatre created by the celebrated scenic artist, William Hemsley in 1896. A biographical approach will be taken to understand this space from its inception as a Banqueting Room in the 1830s to today, and to situate it in local and national narratives of the country house. Surviving stage sets and archival sources will be used to reconceptualise and reinterpret this space, shedding light on the construction of class and gender identities within the household, estate and wider community. New forms of creative content will be developed, making the spaces and stories of Chatsworth’s Victorian theatre more accessible to visitors and better known to scholars and curators.

Following the completion of my BA (Hons) in History of Art at Bristol, I trained as a performer at the London Academy of Music & Dramatic Art. I worked as an actress for ten years (which means 75% doing anything BUT acting, including: tutoring (Maths), managing a commercial art gallery, failing as a receptionist at Sotheby's) before undertaking my MA in Conservation of Historic Buildings here at York. Following graduation, I pursued a freelance career across Heritage and performance.

My PhD research comes off the back of my interest in Joseph Harker, an eminent scene painter in the late nineteenth- and early twentieth-centuries, and co-leading a campaign to prevent his historic studio from being converted into flats (YouTube: "pathe Joseph Harker" to see him at work in 1922). My research into the theatre at Chatsworth is funded by the White Rose College of Arts & Humanities (WRoCAH). 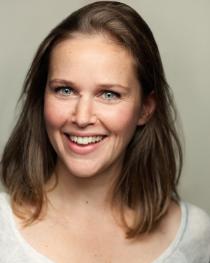