‘a poignant and affecting piece… Little Angels is bleak and uncompromising, but engaging with darkly comic moments and is very well executed.’ The Press

Hannah Davies (current PhD by Practice Playwriting student) talks about the recent production of her play at York Theatre Royal.

I wrote Little Angels because I wanted to explore the topic of teenage motherhood, as opposed to the often vilified issue of teenage pregnancy. The play tells the story of seventeen year old Chloe. It follows her journey as she struggles to find a way to embrace her maternal role, overcome the demons of her past and begin to heal the wounds between her and her own mother.

Little Angels underwent several development periods and rehearsed readings with the kind support of York Theatre Royal artistic director Damian Cruden. These readings were intrinsic to the development of the piece; inviting feedback on my work from others is a part of the writing process that I cherish. Seeing the text in the mouths and bodies of actors helps me to see clearly how a play needs to progress and comments from audience members from these early readings help me to structure the finer points of the narrative in further drafts.

Little Angels was produced in September at York Theatre Royal’s Studio by the theatre’s Young Actors Company. The Young Actors company is an in house company at the theatre for 18 – 25 year olds and is set up to offer a bridge into the professional industry. Seeing the piece performed by young adults was incredibly rewarding to me, as out of the plays cast of six, four of the characters are in their young adulthood. It seems appropriate that young people were given the opportunity to engage with a piece of writing that seeks to engage with a theme relevant to their age group. The production was directed by head of the Young Actors Company Julian Ollive and designed by Claire Brown. 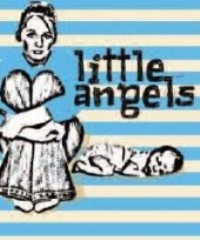 I am currently developing  a new piece This is Not a Festival, which is set in 1985 and focuses on a young family of travellers after a brutal police eviction. The play was recently long listed for the Royal Exchange Bruntwood Playwriting Prize. I plan to hold a reading later this term, so consider yourselves invited, be great to hear what you think of it!