On October 14th, a group of Yorkshire based media professionals visited the new Theatre, Film and TV building, for a tour of the facilities and a talk by University of York chancellor Greg Dyke. 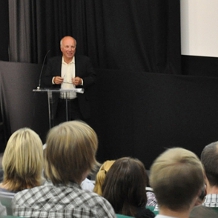 The tours took in the 200-seat theatre; the black box studio and shooting stage; the two TV studios; and the dressing rooms, make-up, costume and laundry facilities for visiting companies. There was also a brief glimpse of the picture and audio finishing area, which are – er – not yet finished.

The main event was a talk from former BBC Director General, Greg Dyke, held in the digital cinema. Greg was welcomed by Chris Brooke, of Rolling Snowballs Productions, who chaired the event; and Heather Niven of Creative York, and Hugo Heppell from Screen Yorkshire who sponsored it.

Then, with a brief pause for an ear-trembling showcase of the cinema’s sound system, Greg was introduced by Andrew Higson, head of the Theatre Film and TV Department. Andrew holds the Greg Dyke chair of Film and Television, and was pleased to note that there, in front of him, was Greg Dyke, in a chair! Andrew explained that the building is both an academic establishment and a commercial facility, and so would be a great resource for producers in Yorkshire.

Greg talked mainly about the BBC’s move to Salford, which he instigated. He explained that the audiences for, and appreciation of, the BBC are much lower in the north than in the south.  He suggested several reasons why this might be, and expressed his disappointment that his original idea (to move at least one channel commissioner) had fallen by the wayside after he left.

However, he still believes the move will create important opportunities for northern talent.

During the question and answer session, Greg offered many insights into the past, present and future of TV in this country. The future looks good, but you must be realistic, and move with the times. His tip for success? “Follow the money” – and the smart money is on producing modern and relevant comedy. That’s what British TV is crying out for, according to Greg.

He also talked about the future of the BFI, of which he’s chairman. Of course, the coalition government’s funding cuts will affect how the BFI is run, but with a bit of fluid thinking, the organisation will be around for a long time to come.