Premiered at the Royal Court in 2012, where it was named “best play” by the Evening Standard Theatre Awards, Nick Payne’s internationally acclaimed Constellations will come to York in October. Heralded by The Telegraph as a “playful, touching and intelligent play that packs more into an hour than most plays do in three”, Constellations marks Squabbling House Theatre’s debut production as a company.

Recipients of the 2017 York Performance Award, Squabbling House, a dynamic new company of graduates, are delighted to return to their former home at The University of York’s department of Theatre, Film and Television to present Constellations, a play about science, possibility and honey.

The production will be directed by Thomas Leadbeater and star Harriet Patten-Chatfield and John Chisham.

We would love for you to join us. 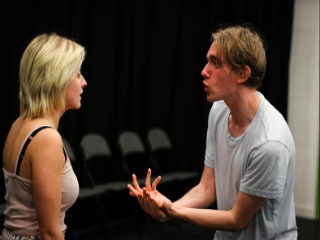