Home>Theatre, Film, Television and Interactive Media>Events>2015>This is a Public Announcement 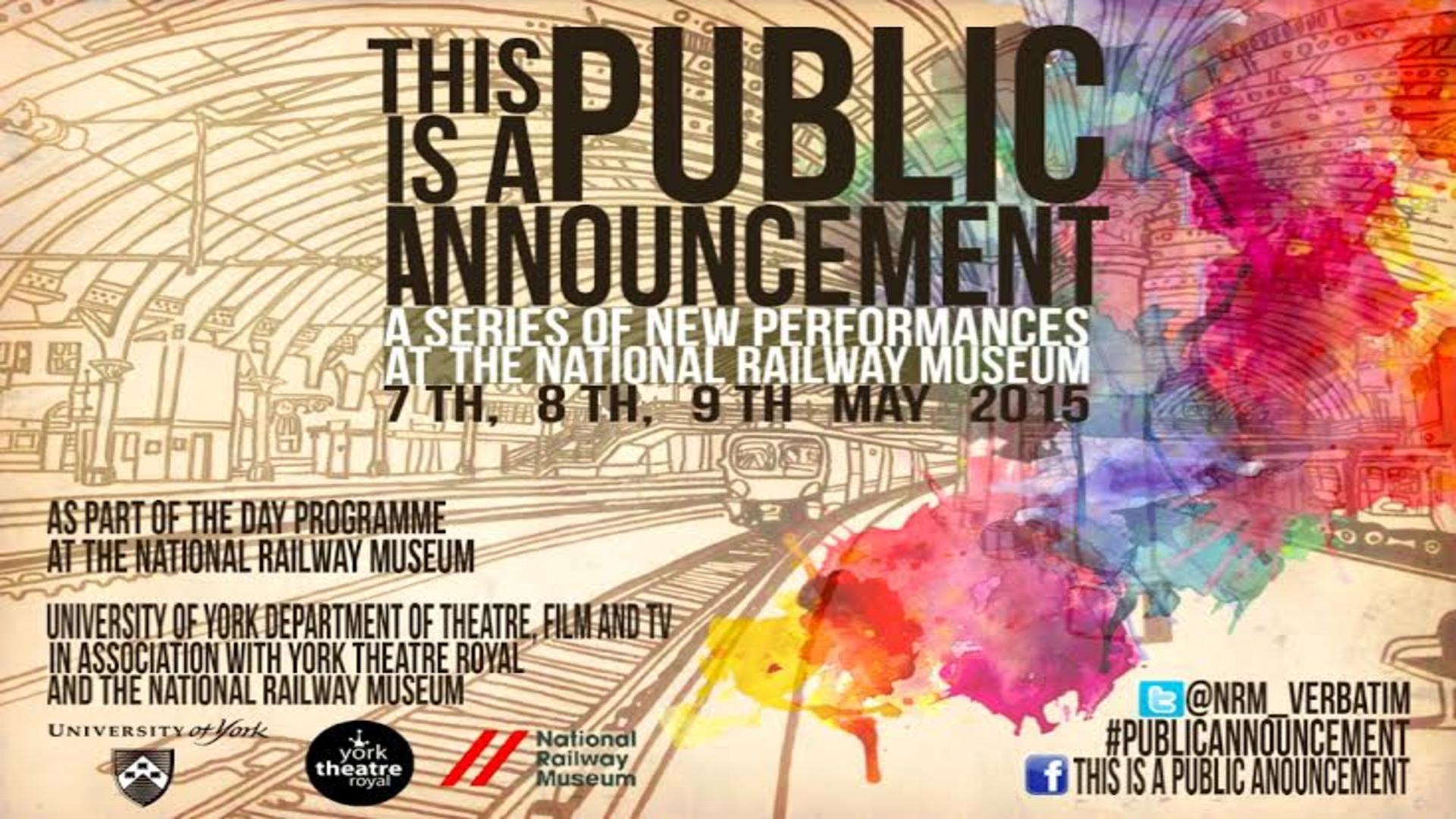 This is a Public Announcement

At the atmospheric Station Hall in The National Railway Museum.

In association with the National Railway Museum and York Theatre Royal, the second year BA Theatre students of University of York’s Department of Theatre, Film and Television proudly present This is a
Public Announcement, a three-part festival of interactive performances hosted at the National Railway Museum on the 7th, 8th and 9th of May. This free family event will be the culmination of work from dedicated
and enthusiastic young theatre makers, who have great pleasure in inviting audiences to three fun days of theatre for all ages.

All three performances will be Verbatim Theatre - based on interview and documentary material, with the aid of the National Railway Museum’s Search Engine - and will offer a platform for local and national voices to be heard. The second year BA students will be presenting their original plays to audiences at the National Railway Museum’s atmospheric Station Hall in May, which, due to the York Theatre Royal undergoing major renovation this summer, is becoming a theatrical hub, hosting productions in Summer 2015 including In Fog and Falling Snow and The Railway Children.

The students have created three fun and exciting performances: Connections, Making Tracks and Unattended. Each play is very different. Connections explores the contemporary debate revolving around HS2, Making Tracks travels through women's roles in the rail industry and explores how the treatment of women has changed over time and Unattended presents an exciting quest to find a variety of missing items after a mystery break in at the Baker Street Lost Property office!

The Connections Team
“Play Connections! The brand new, interactive board game investigating High Speed Rail 2. Come and play for the chance to become George ‘The Railway King’ Hudson’s apprentice! Move around the board and land on the question squares to unlock new games! Take part in ‘52 Billion Pound Drop’, ‘Spin the Wheels’ and dare to enter the ‘Apprentice Boardroom’. Delve deeper into the nationwide debate on the proposed High Speed Rail 2 link, fuelled by the real voices of real people. You play the game. You make the decisions. You make the connections. Join us on Thursday 7th May to play!

The Making Tracks Team
“Making Tracks is an interactive exhibit that allows the audience to join us as we explore the roles of women in the railway. With just the touch of a button, the audience will be taken on a journey through time! Which part of history will it lead you to? Will you be sent back in time to the days of the first women of the railway? Or jump ahead to hear tales of women of women as passengers, engineers and guards? The only way to find out is to press the button, and just enjoy the ride in time as we watch women Making Tracks!”

The Unattended Team
“Calling all young detectives! Stephen works in the Baker Street Lost Property office and he needs your help! His office is full to the brim with weird and wonderful items, and it’s his job to look after them and help people get back the things they’ve lost. But today they’ve had a break in and everything has been stolen! Will you be able to track down the lost property for him, or is it gone forever? Come and find out in this fun-packed, interactive quest! (Oh, and watch out – there may be a robber on the loose…)”