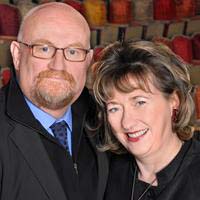 A Conversation with Rosemary Squire

With her husband Howard Panter, Rosemary Squire founded and runs the Ambassador Theatre Group, which controls by far the largest theatre holdings of any UK company. Earlier this month, ‘The Stage’ announced that they had retained their ‘first place’ position in the journal’s Top 100 for 2011, because of the diversity of the production activity, and entrepreneurial energy, of their company.

In 2009, they oversaw the biggest theatre purchase of modern times when they bought out Live Nation’s UK venues for £90 million. Their West End production successes in 2010 include the musical ‘Legally Blonde’ and  Moliere’s ‘The Misanthrope’ (with Keira Knightley), while they also masterminded UK tours of ‘Spamalot’ and ‘The Rocky Horror Show’.

The scale of their operation, as both theatre owners and producers, means that they offer a wide range of employment opportunities to both highly experienced professionals and those launching a career in production or management.

This event will begin as an interview and develop into a question-and-answer session with the audience.