Low income households in the UK are struggling to sufficiently eat and heat their homes, according to a new joint report by the Sheffield Political Economy Research Institute (SPERI) and the Department of Social Policy and Social Work at the University of York.

The combination of growing food bank use, welfare cuts and rising energy bills has led to a h‌igh-profile political debate about food and fuel poverty in the UK, and the impact of austerity on low income households.  Attention has focused on the choice between ‘heating or eating’ that many people are seen to face. 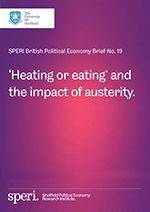 The report confirms this dilemma exists, but says the reality is more complex and severe than is often reported in the media and political debates. Interviews with food bank users revealed that their decision is not choosing to heat or eat, but how to spend less on their food and fuel.

Dr Hannah Lambie-Mumford, co-author of the report and research fellow at SPERI at the University of Sheffield, said:

“The ‘heat or eat’ dilemma is real, but our research suggests that this winter many low income households won’t be able to afford either sufficient food or fuel. These incredibly tough budgeting decisions are leading households to prioritise and ration their spending in complex ways. Food is often prioritised over heating, although cheaper food is often bought out of necessity, and using energy for lighting, cooking and hot water is often prioritised over heating.”

The research found that government welfare reforms, benefit payment delays and an increase in benefit sanctioning are all negatively impacting the budgets of low income households.  Cuts to local government budgets are also reducing the ability of local services to support people at risk of fuel and food poverty.

“Low income households face a combination of further large cuts to the welfare budget which risk forcing them to reduce their spending on food and fuel, and cuts to council budgets which risk weakening local support services. Action is urgently needed to address the root causes of food and fuel poverty.”

The report also analysed the specific challenges faced by rural communities which drive rural food and fuel poverty. These include the large distances that people often need to travel to access food banks, libraries or advice services, and limited public transport; a lack of affordable housing which is made worse by ‘second’ holiday homes; cold and damp private rental housing; low pay and insecure seasonal employment; poor mobile and broadband coverage which makes applying for jobs difficult, and restricted access to cheaper forms of fuel such as mains gas.

Dr Carolyn Snell from the Department of Social Policy and Social Work at the University of York, and co-author of the report, said:

“More research is needed to understand the impact of austerity on all households, in cities and rural communities, and the complex budget decisions for their food and heating costs they are being forced to make.”