On 7th March, the University of York Criminology and Criminal Justice Society was lucky enough to welcome Erwin James as the final speaker in a series of guest talks on the criminal justice system. Jess East, Criminology student and CrimSoc organiser, wrote the following account.

In August 1984, Erwin began a life sentence for murder, of which he served 20 years. During this time, he began writing as a columnist for The Guardian. These first-hand experiences meant that Erwin was able to offer a truly unique perspective on the criminal justice system. 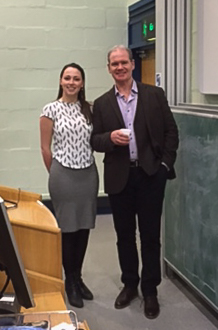 In this talk, Erwin highlighted the importance of proper youth justice practices as he reflected upon his first criminal conviction, the burglary of a sweet shop, which led to him being taken into care at the age of 10. He spoke of the bullying he was subjected to by other children whilst in care and the lack of a homely environment there. This was a refreshingly new perspective on the effectiveness of care homes as an instrument of the youth justice system and one which stressed the importance of a supportive environment for young people. It was a fact compounded by his reflection that few of the other boys he had known at the care home had gone on to lead a crime-free life.

Stability was a common theme throughout Erwin’s narrative as he also commented on his transient lifestyle before the care order and after he left the care home aged 15. At 7 years old, Erwin had lost his mother in a fatal road traffic accident which left his father seriously injured. Erwin commented on his father’s dependency on alcohol as a coping mechanism and the violence and abuse which often arose as a result of this. Consequently he found himself distancing himself from family and living with extended family members and eventually on the streets, sometimes sleeping outdoors for weeks on end. Erwin also discussed his heightened vulnerability whilst living on the streets as he commented on how easily he was led astray and encouraged to commit crimes. Yet despite these numerous factors, he stressed that he did not want these to be seen as mitigation for the crimes he committed – a very sincere recount.

The escalation of his criminal behaviour reached its peak in September of 1982 with his acquaintance William Ross, resulting in the murders of two people. Understandably this was a very difficult topic for Erwin to discuss as he likened the hardship of living with the consequences of his actions to a different type of life sentence as he dedicates his life now to doing the right thing in memory of his victims. However perhaps most striking of all was his candid discussion of prison life as he spoke of the high suicide rates in his unit and the psychological impact that had of knowing that a fellow inmate had ended their life. Erwin also recounted the horrible living conditions and very limited opportunities at the prison.

As a criminologist, I had always regarded education as an important part of the rehabilitative process however Erwin’s discussion made me realise just how important this is. Erwin had always been good at English literature. He commented on how, if he had been encouraged to attend school properly whilst in care, he would most likely have been on a more positive pathway. The prison library became a haven for him during his imprisonment and helped him escape from the harsh reality of custody. This was a liberty which was not lost on Erwin as he referred to the high levels of illiteracy in prisons and his reputation amongst other inmates as the man who could write a good letter. Nevertheless when the unique opportunity of writing for The Guardian newspaper presented itself, despite the initial reluctance of the prison to allow him to do so, eventually he was given the go-ahead. His regular column ‘A Life Inside’ went on to be read and enjoyed by millions.

In the environment of limited opportunity which was the prison system, Erwin regarded it as a lifeline and one which ultimately bridged the gap between custody and parole. He also recounted how the limited funds he had earned in his journalism had given him more than the meagre double digit figure usually given to inmates upon release and hence he spoke of his gratefulness for the opportunity and the new life it had given him.

Hearing someone recount the difficulties they have faced in their life and how they have managed to turn their life around despite committing brutal crimes was a very unique experience and one which was built upon my understanding of deviance and the criminal justice system. Erwin James brought together a number of issues facing policy makers and made myself and the rest of the CrimSoc audience question the regulation and effectiveness of crime prevention measures and sentencing strategies and the frequent neglect of rehabilitation in favour of more punitive sanctions within the criminal justice system.