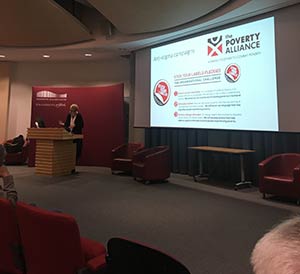 The Department of Sociology's first public lecture took place on Monday 29 October, with guest speaker Professor Imogen Tyler from the University of Lancaster. The lecture introduced Imogen's forthcoming monograph, Stigma Machines, which develops a new account of the social and political function of stigmatisation as an instrument of social policy and a constituent mechanism of the state’s coercive apparatus.

To reconceptualise stigma in ways that explicate its function as a form of power, her book examines the long penal history of stigma. It argues that stigma is designed, crafted and activated to govern populations on multiple scales and in diverse sites and, crucially, that stigma production from above accelerates in periods of political and economic turmoil, often in response to particular demands of capital.

The lecture focused on a chapter of Stigma Machines, ‘Badging the Poor’, in which Imogen examined the mechanics of intensified welfare stigma in the UK in the wake of the implementation of austerity-driven reforms to social provision since 2010.

Learn more about the Department of Sociology at the University of York.