Living Wills: What would you want? 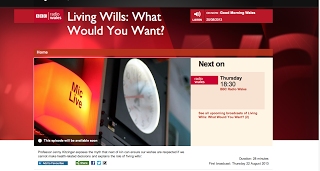 On Thursday 22 August there was a broadcast of a radio programme developed out of the work of the ESRC Seminar Series on Advance Decisions (PI, Celia Kitzinger) and the work of the York-Cardiff Chronic Disorders of Consciousness Research Centre. It was called Living Wills: what would you want?

Presented by Jenny Kitzinger, the programme explored people's experiences of having a relative with catastrophic acquired brain injuries. In vivid and moving interviews, people described their family experience and the effect it has had on their own end-of-life decision-making. The programme included comment and discussion from international experts, including extracts from Nancy Berlinger's talk at the Advance Decisions panel public engagement event in Cardiff.