Researchers from the University of York are hoping to create a better understanding of engineering by exploring its role in sound recording. Their starting point will be asking people working in the audio industry if they consider themselves to be technical engineers or artists - or something else entirely. 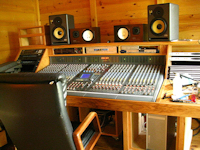 The research will be led by Dr Jez Wells from the University’s Electronics Department who has been awarded a Fellowship by The Royal Academy of Engineering.The award under the Academy’s Ingenious scheme is designed to promote ideas which make engineering more accessible to the public. It also aims to equip engineers with the skills they need to explain clearly what they do and how they do it.

At York, the Fellowship has created an unusual partnership between Electronics and Sociology, with Dr Wells collaborating on the research with sociologist Dr David Beer.The Fellowship will begin in September with a series of forums aimed at drawing three key groups into a debate on whether sound recording is engineering. The groups will be engineers - both from the sound recording industry and unrelated fields, higher education students on audio-related courses, and 16-18 year-olds considering a career in sound recording.

Sociologist Dr Beer said: “The forums will allow us to collect some very interesting data about identity and how sound engineers define themselves as a community. There are also issues around the practice of making culture. Sound recording has transformed communication, music, heritage and education, yet we know very little about the things we consume all the time as we don’t really know or understand how they are made.”