The June York Deviancy Conference was a roaring success; around 250 academics and practitioners from 30 countries joined the historic meeting which was set-up to celebrate critical studies in criminology. 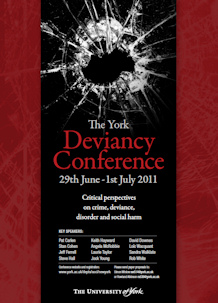 The meeting not only followed the first wave of meetings held at the University of York in 1968 (and with annual meetings until the mid 1970s) but also gathered together several of the key figures who attended that first event: Stan Cohen (author of Folk Devils and Moral Panics and States of Denial), Jock Young (The Drugtakers; The Exclusive Society), Roy Bailey and Frances Heidensohn (Women and Crime; Gender and Policing) and Tony Jefferson (co-author with Stuart Hall, Policing the Crisis; Resistance Through Rituals). These initial keynotes offered insights into the original York meetings while highlighting the relevance of critical criminological work around moral panics, the critique of state-based statistics, the importance of applying academic work to practice and the ongoing centrality of feminism to many of today’s problems.

Three important contextual forces acted as the backdrop to the conference. The first was growing national and international anxieties about the problems of crime and social harm that have been facilitated or generated by globalisation and increasing social and economic connectivity between nation-states. The second was, of course, the continued unravelling of the financial crisis and the growing awareness among many commentators of the social impact of governmental austerity measures upon vulnerable populations, a process that continues apace and in the absence of any progressive personal and corporate taxation agendas. The final set of changes relates to the rise of ICT usage and the broader linking of media technologies and entertainment media (films, videogames and so on) that are either focused on or potentially generative of new forms of social harm.


More than 150 presentations focused on an incredibly broad range of issues including immigration, imprisonment, violence, trafficking, corporate and environmental crime, warfare, gender, policing, poverty and social exclusion. Many papers raised concerns about rising levels of complacency in much academic thinking around social harms and the need to revitalise debate around the limits of capitalism to generate socially equitable and safe environments for populations around the globe. A keynote presentation by Alex Callinicos, for example, provided scope to think about how the failure of state and corporate finance has generated extraordinarily pernicious consequences for those on low incomes and in neighbourhoods already characterised by high levels of social stress and a lack of integration into education and work opportunities. This perhaps leads to a broader point about the atmosphere of the conference itself, with many discussions focusing on the need to provide spaces and platforms through which alternative voices can be rallied and heard that might contrast and critique mainstream media and political narratives about the necessity for the retrenchment of social investment on the one hand, and the need to combat criminality and immigration on the other.

In short it is clear that the York Deviancy Conference highlighted the need and relevance of modes of thinking and empirical research that do not simply accept the necessity or value of existing models of policing, criminal justice and social control more generally. Protests and the killing of civilians around the Mediterranean, new questions about the costs of drug prohibition, the significance of the criminal activity to the formal economy and the focus on humiliation and social pain in media forums and film suggest the need to re-consider the function of academic criminology and social critique more generally. Many of the papers presented at the conference will be published across two books and a journal special issue and will undoubtedly provide scope for these ideas to filter into public and policymaker dialogues as well as, we hope, providing scope for broader public engagements by criminologists to provide constructive yet honest accounts that move beyond the veneer of much anodyne political and social commentary; highlighting the incredible violence and damage that has been generated by the excesses and inequalities found in many western societies today.