On the 12th April, staff and PhD students from the Stockholm Environment Institute and the Department of Environment and Geography answered questions put to them by young climate strikers. 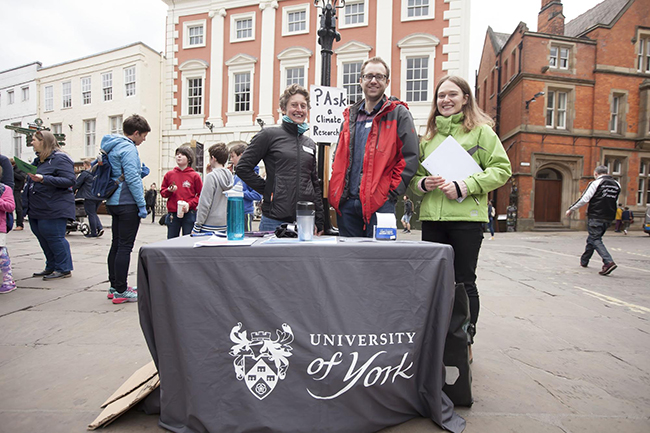 What do you think of recycling? Is recycling worth it? Does it send the wrong message that we can carry on our lifestyles?

There are high energy costs involved in recycling, and it is always better to avoid unnecessary consumption to start with. However, sparing resources (e.g. forests) is positive, and it is an action that people can do individually. The mantra of reduce, reuse, recycle is a useful one in prioritising how to minimise our impact: use less, make the most of what we do use, and once finished, do everything we can to bring the component parts back into use. These are key principles of the circular economy (read more about the circular economy on the Macarthur Foundation website).

If temperatures increase by 1.5 degree C, what proportion of species will we lose?

We are already seeing species losses that are tied in to the interaction between land use change and climate change. On average, populations of mammals, birds, fish, reptiles and amphibians have declined by 60% over the last 40 years, in large part due to over-exploitation and agriculture (see https://www.worldwildlife.org/press-releases/wwf-report-reveals-staggering-extent-of-human-impact-on-planet). Climate change can reduce the areas where species are able to survive, and keeping to a 1.5 degree C increase rather than 2 degree C could halve the risk of biodiversity loss, according to a recent study.

Does the University of York get its electricity from green sources?

Currently, the University of York gets approximately 60% of its electricity from gas-powered combined heat and power (CHP) units, and approximately 40% from renewable sources (including purchased renewable electricity, and a small number of solar panels on campus buildings). The University of York plans to reduce its carbon footprint through efficiency improvements and diversifying its energy sources (see the University’s Carbon Management Plan for more details, https://www.york.ac.uk/about/sustainability/energy/).

Is there any movement to drop investments in the fossil fuel industry from the University of York?

Billions of pounds worth of university endowments have now been divested from the fossil fuel industry. This includes high profile examples such as Edinburgh, Durham, Cardiff and Sussex. There is a student-led campaign calling for divestment at the University of York.

What resources on climate change are available for an intelligent but time constrained person?

What do you make of carbon offsetting? Is it a scam?

As with the question on recycling above, it is better not to emit carbon to start with. There are concerns that carbon offsetting could not be as effective as carbon offsetting companies say. Tree planting is only effective if the trees are managed so that they continue to grow. It takes a long time for carbon to be locked away in the ground, the forest needs to be there and managed for hundreds of years, but many offsetting schemes don’t take this into account. Another consideration is where are the trees being planted - are other trees being cut down to make space for the offsetting trees? Would that tree planting have happened anyway, or is it additional? To be confident in carbon offsetting, you need to investigate these questions first.

An alternative to carbon offsetting might be to make a donation to a charity that helps communities to live with the consequences to climate change. Practical Action works with communities to free themselves from poverty and disadvantage, or TIST which works to improve people’s lives alongside managing carbon stores.

I’m all for the end goal (stopping climate change), but how?

There are actions that individuals can do through changing their lifestyles: e.g. avoiding flying and driving, walking more, choosing to buy from more environmentally friendly companies, switching to renewable electricity, and reducing meat and dairy consumption. Local action is important, as it shows governments and big corporations that there is support for climate action at bigger scales. But perhaps it is actually more worthwhile to put your effort into actions that change things for everyone, not just individuals, e.g. civil action/disobedience, contacting your MP, encouraging companies to develop greener policies, and campaigning for fossil fuel divestment.

I’m a trainee teacher, what can I do?

Is it unfair to ask developing countries to limit their emissions?

Whilst the historically unbounded use of fossil fuels in Western countries could make it seem unfair to demand developing countries to limit emissions, there are many potential benefits of developing through a low carbon economy, such as better air quality, complying with international environmental agreements, and investing in globally leading technologies. However, there have to be concurrent reductions in emissions in developed economies, where emissions per person are generally still much greater.

What about climate-smart agriculture and GM crops?

Whilst some GM crops have negative impacts and tie farmers into using particular pesticides, other GM crops can be beneficial if they are developed to grow with fewer resources or adapt to new climates. For example, a salt-tolerant rice variety has been successfully grown in Bangladesh following climate-driven increases in salinity. These advances could help farmers face climate change impacts on crops.

If you have a question related to climate change then come and find a scientist at the next Climate Strike.