Green GB Week - what do the public think about climate change?

During Green GB Week (15-19 October 2018) the Priestley International Centre for Climate (University of Leeds) led a high profile programme of activities and events including a public engagement event and survey across Leeds, York, Newcastle and Manchester. The centre in collaboration with Leeds Climate Commission, SEI- York, York Environmental Sustainability Institute, Tyndall Centre Manchester and Newcastle University conducted questionnaire surveys and featured art, music, poetry and museum artefacts which were used by the researchers to attract attention and start conversations with the public. The York contribution (SEI-Y and YESI) gave the public in York's Parliament Street an opportunity to paint or draw what they felt about or had experienced climate change. 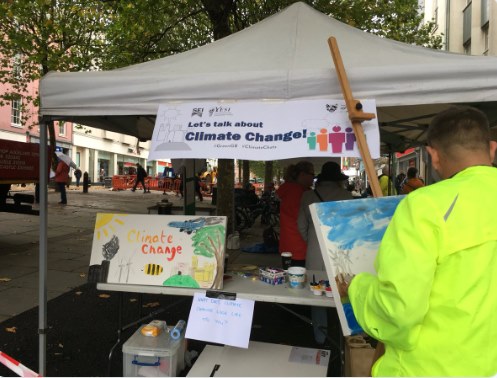 The surveys took place on Monday 15 October, the first day of Green GB Week and seven days after the publication of the IPCC’s Special Report on Global Warming of 1.5°C. The report made headlines around the world, with the urgency and scale of emissions reductions needed to stay under a temperature rise of 1.5°C coming through strongly.

The outcome from the on-street survey produced valuable insights into the public’s views on climate solutions. Just over half (50.6%) of those surveyed said they were “very concerned” about climate change while a further 39% were “fairly concerned”. Only ten per cent were not very concerned or not at all concerned. A substantial majority (82%) said they had personally noticed signs of climate change.

The climate solutions survey was also used to collect questions from members of the public to put to a panel of climate scientists from the four universities and other experts at a Climate Question Time event during Green GB week. The sold out event, which was held in the council chamber at Leeds Civic Hall, attracted an audience of 120 and was livestreamed on the University of Leeds YouTube channel.

Questions were asked about tipping points, the influence of climate sceptics, keeping below 1.5°C, plant-based diets, fracking and climate targets, the role of local government in tackling climate change and what individuals could do to tackle climate change.

The event was chaired by Andy Gouldson, Professor of Environmental Policy at the University of Leeds, who is also Chair of Leeds Climate Commission and Deputy Director of the Centre for Climate Change, Economics and Policy (CCCEP) at Leeds. It was introduced by ITV news presenter Christine Talbot.

Watch the livestream of the Climate Question Time.

Read more about the activities.

Read a detailed analysis of the results from the survey in the online report (PDF).