Two York-based academics are the team behind the UK’s entry in an artificial intelligence (AI) version of the Eurovision Song Contest.

While Eurovision 2020 has been cancelled due to COVID-19, an AI version of the contest, hosted by the Dutch public broadcaster VPRO, will go ahead virtually.

The competition aims to show whether AI can help humans to compose songs on a par with Eurovision hits like Cliff Richard’s "Congratulations" (UK, 1968) or ABBA’s "Waterloo" (Sweden, 1974).

Dr Tom Collins, from the University of York’s Department of Music, and his spouse, Dr Nancy Carlisle, from Lehigh University, USA, wrote and recorded the UK’s entry – an eerie ballad called “Hope Rose High”. They used an algorithm written by Tom, which generates new material in the style of an existing corpus of music.

After setting the algorithm to work analysing a data set of 200 previous Eurovision songs, Tom programmed it to generate 30 four-bar melodies, chord progressions, basslines, and drum beats. The lyrics were also generated by an algorithm before Nancy paired them with melodies and chords that seemed to fit well together. Tom then added a baseline and arranged the song with some human touches.

Dr Tom Collins said: “The song and video have all come together in a bit of a hurry while my family and I are on lockdown through the COVID-19 outbreak.

“Rather than pitting man against machine, I hope this contest will increase public understanding of how AI can increasingly be used as an aid to humans in the creative process as opposed to a replacement.

“I think we will see the use of AI increasingly in the music scene. In creative industries many people struggle with the ‘blank page’ problem, where creativity is stifled by having too many options. AI can help by providing stylistically appropriate jumping off points.” 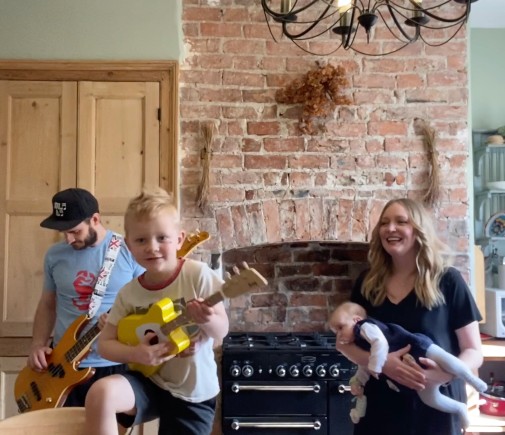 “Hope Rose High” will compete with 12 other entries from across Europe and Australia - genres range from piano ballads to punk to pop songs.

The competition will launch on 10 April, with the winners announced in May. The entries will be judged by the public and a panel of AI experts on criteria including lyrics, originality and “Eurovision-ness”.