Student-led research has furthered our understanding of how strokes affect our ability to recognise faces. 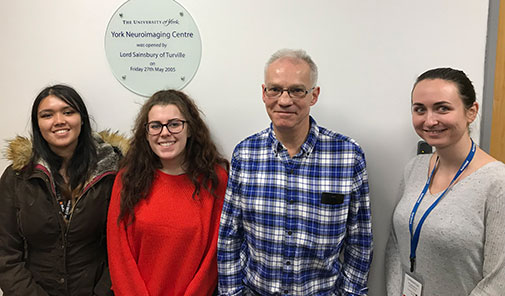 They worked with Herschel, a 62-year-old prosopagnosic who is unable to recognise any faces including his wife and close family. This is because the part of the brain in humans that typically recognises facial identities - the right ventral occipitotemporal cortex - was destroyed when he suffered a stroke.

However neuroimaging scans showed that the part of the brain that processes facial expressions - the right superior temporal sulcus - was still functioning in Herschel at a level that was equivalent to other men his age.

The students carried out the research with Dr Magdalena Sliwinska and Dr David Pitcher from the Department of Psychology.

Dr Pitcher said: “This was a great opportunity for our students to get involved in a study that gives us new insights into the impact a stroke can have on different parts of our brain. It adds to our knowledge and could pave the way for future therapeutic advances.”

Caitlin, who recently graduated from York with an MSci (Hons) in Neuroscience and Neuroimaging, is now working as an Assistant Neuropsychologist in the NHS.

The paper Dissociable pathways for moving and static face perception begin in early visual cortex: Evidence from an acquired prosopagnosic is published in Cortex