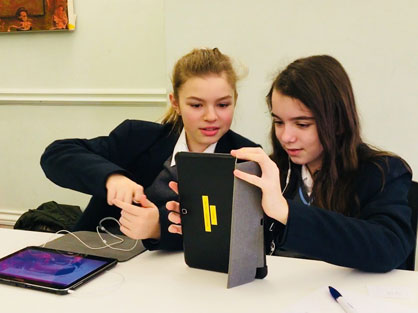 Over the course of a day, nearly 100 students from North Bridge House Senior Canonbury School took part in interactive tablet/smartphone activities on the University’s new Yormega Games app; a programme designed to ascertain the impact of distraction on working memory.

Head Teacher at North Bridge House Senior Canonbury, Jonathan Taylor said: “A fun activity but serious topic: the impact of distraction on working memory of teenagers is an under-explored area of research. We are keen to understand how and why poor working memory may hold some children back academically”. 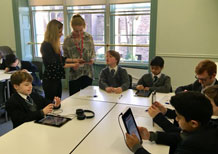 This research follows the success of previous work published in the Proceedings of the National Academy of Sciences, in which the performance of 29,000 adults in smartphone memory games provided insights into different types of information filtering and situational changes to working memory during aging. Investigations such as these play a significant role in increasing the understanding of the relationship between reduced working memory and poor academic performance.

Dr Fiona McNab, Lecturer from the Department of Psychology, commented on the importance of the research: “In the longer-term, it is hoped that we are able to use these insights to develop ways to improve working memory for those who struggle with this important aspect of cognition”.

Following success of the initial large-scale study, the Yormega Games app was developed to investigate the limits of working memory ability, and how to make best use of it in the classroom and beyond. By using a gamified approach, researchers are able to collect the vital data needed to address these questions, while the participants enjoy the challenge.

You can get involved in the research project and play the Yormega Games.