This thesis aims to explore the anomalous choices made by Islamist radical movements in Malaysia, in relation to their foreign and domestic activities. First, what has encouraged radical Islamist movements to join foreign-oriented militancy and fight abroad? And secondly, what has prevented some of these radical actors from acting similarly at the domestic level, where they have not yet posed a serious threat to the Malaysian state? The research is focused at the macro-level, seeking to understand the pathways of Islamist radical action in relation to their modes of interaction with the state. This research does not focus on micro-level and individual motivations.

Adeen's research is sponsored by the Ministry of Higher Education, Malaysia.

Understanding the geopolitics behind the Taliban killings, Available at https://www.academia.edu/16934738/Understanding_the_geopolitics_behind_the_Taliban_killings

The clash between terror organisations, Available at https://www.academia.edu/18177900/The_Clash_between_Terror_Organisations

Adeen is a member of Department of International Relations, Faculty of Humanities, Arts and Heritage, University Malaysia Sabah and Associate researcher at Iman Research in Kuala Lumpur, focused on the study of counterterrorism and political violence.

Adeen is a consultant at the International Insitute of Islamic Civilisation and Malay World (ISTAC) for the research entitled “Understanding Extremist Discourse: Intervention and Rehabilitation: Bridging the Gap between Stakeholders in Malaysia and Southeast Asia”. She is also a consultant for the co-development of Preventing Counter-Violent Extremism, a one-year research project (October, 2018-September, 2019) of the International Islamic University Malaysia (IIUM), ISTAC and the National Consortium for the Study of Terrorism and Responses to Terrorism (START), University of Maryland (US). Under this research collaboration project, she will be in charge of the co-developer software of Geo-Spatial instrument for “Spaces of Extremism: Locating Where to Protect and Where to Communicate” – using a traditional and emerging spatial analysis to identify vulnerable locations in Malaysia that could serve as incubators for extremist activity. 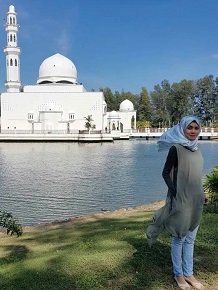