Hannah’s thesis addresses how contemporary British literature deals with ideas of multiculturalism. She will primarily be looking at authors of Muslim origin, from the more secular such as Salman Rushdie and Hanif Kureishi, to the more pious such as Leila Aboulela . Through examining these works of literature, she hopes to understand how a variety of authors address issues of racism, ethnic tensions, cultural offence, religious identity, and gender relations in multicultural communities in Britain today.

Hannah is supervised jointly between the Department of English and the Department of Politics. She is funded by the ESRC and is part of a network called ‘Reshaping Multiculturalism through Cultural Practices’ which is supported by academics at York, Leeds, and Sheffield universities.

2015 Seminar tutor for undergraduate module Global Literature (Department of English and Related Literature). Texts include (but are not limited to): Beowulf, Othello, Season of Migration to the North, Foe and Oroonoko 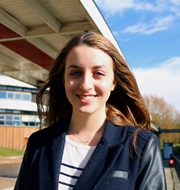