Political thought during the English revolution is characterised by two interwoven imperatives: to find constitutional order and stability in a world turned upside down, and to ensure that the ‘new’ worldly order was compatible with the commands of God. These inseparable concerns were themselves a distinct phase in England’s ‘Long Reformation’, with debates around the powers of magistrates and parliaments, the purposes of the church and pastors, and ideas of toleration viewed through a Reformation prism where legitimacy depended on godly status. In a fractured world, the English state and church needed settlement. My thesis studies an almost decade long dialogue between three (currently) historically minor, but intellectually significant figures – Richard Baxter, George Lawson, and Henry Stubbe – which reveals a set of different theological-political solutions to restoring order and godliness to this upturned world. These discourses reveal a series of debates centred on the origins, jurisdiction, and ends of the church - i.e. the prerequisites for its fulfilment of God’s will on earth - which in turn determined the prerogatives and functions of civil government. Even as every interlocutor in these debates aimed to reconcile the state to the church, the precise form of each, and the relationship between them, were serious points of contention. This dialogue captures the intellectual energy and flourishment of the revolution, as well as a moment of genuine belief that England was about to become a truly ‘holy’ and/or ‘free’ commonwealth. Ultimately, all three of these visions would fail and never materialise, yet the impact of their ideas on subsequent generations was powerful.

My broader research interests are the history of political thought and political theory, particularly i) conceptions of liberty, sovereignty, and toleration arising out of the ‘Long Reformation’; ii) the political and religious theories of Thomas Hobbes, James Harrington, and John Locke; iii) the roles of i) and ii) in, and their connexions to, the development of early enlightenment intellectual culture; and iv) the influence of i), ii), and iii) in contemporary political theory.

“Debating church and state at Interregnum Oxford: Experimenting in Civil Religion”. To be delivered at the conference on “Civil Religion from Antiquity to Enlightenment”. Newcastle University, October 2019.

“Godly representation in the English revolution: Hobbes, Harrington, and Vane”. Delivered at the London Graduate Conference in the History of Political Thought on “Representation and Misrepresentation”. UCL, June 2018. 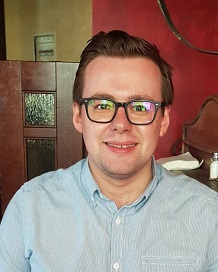