Visit Howard Wilson's profile on the York Research Database to:

My main area of research is in the theory and computational modelling of magnetically confined plasmas, with a particular emphasis on tokamak plasmas for fusion energy applications. My interests can be broadly categorised into plasma turbulence and instabilities, especially the key issues for ITER.

Fusion is the process that powers the stars including our own star, the Sun. If we can reproduce that process on Earth it will provide effectively limitless energy in a safe, sustainable way, with no greenhouse gas emissions and relatively little waste material. The process relies on the fusion of two isotopes of hydrogen, called deuterium and tritium. It requires the fuel to be heated to one hundred million degrees Kelvin. At such a temperature, the deuterium and tritium exist as an ionised gas: a plasma.  In a tokamak, this plasma is confined in a toroidal (or doughnut) shape by a system of magnetic fields. A large amount of the research for fusion focuses on the properties of this magnetised plasma: a complex, subtle and interesting field of science. Magnetised plasmas also exist in nature: the Sun, the solar wind and the Northern Lights are just some examples. They are also used in industrial processes. Understanding the physics of magnetised plasmas clearly has a broad range of interesting, important applications.

One big challenge for tokamak plasma science is understanding a sequence of repetitive plasma eruptions, called Edge Localised Modes (ELMs). As the name suggests, these originate from close to the plasma boundary. An insulating layer can form there, which is beneficial for approaching the extreme conditions required for fusion to occur in the plasma core. However, the steep pressure gradient and strong current density that form in this layer provide free energy to drive a particularly violent instability called the peeling-ballooning mode.  We developed the theory for this instability and proposed it as a mechanism to drive ELMs in the late 90’s. In collaboration with Phil Snyder of General Atomics in San Diego, I developed the ELITE code to provide quantitative predictions of the plasma stability in the insulating layer, which is called “the pedestal”.  This is now used for analysing the pedestal stability to understand how and when the ELM is triggered on tokamaks world-wide, including JET, MAST, DIII-D, Alcator C-Mod, NSTX, JT-60U and ASDEX-Upgrade.

I am interested in the nonlinear theory of ballooning modes, to understand how ELMs develop. Our nonlinear magneto-hydrodynamic (MHD) theory predicts that ELMs do not eject a uniform shell of plasma, but rather expel filaments of heat and particles very violently. They were predicted to appear in a manner similar to solar flares, but the filamentary structures would only last fifty microseconds, so observing them is a challenge. Nevertheless, experimentalists have employed high resolution imaging systems to identify the filaments, and now there is very clear evidence for them, providing at least qualitative agreement with the theory. The violence of the eruptions is predicted by the theory to be a consequence of a quadratic nonlinearity that leads to explosive growth (i.e. a finite time singularity).

The amount of fusion energy that a tokamak such as ITER will produce is determined to a large extent by the plasma turbulence that leads to losses of heat and particles. If turbulence can be understood and controlled, it would revolutionise the approach to fusion energy. The insulating, pedestal region at the plasma edge is of particular interest because the turbulence is quenched there. Indeed, it is believed that it is the quenching of the turbulence that provides the insulating layer. If we can understand the mechanism of this turbulence quenching, perhaps we can develop ways to make the insulating region wider, greatly increasing the core pressure and hence the fusion power. Strong plasma flows are observed in the pedestal region, and these are thought to lie behind the quench mechanism. To explore this, I am particularly interested in the effect of flows on the fine scale micro-instabilities that are believed to stir up the plasma and cause the turbulence. There are interesting subtleties associated with understanding micro-instabilities in a doubly periodic system, such as the toroidal plasma of a tokamak. How to deal with these subtleties is not yet understood, I would argue.

I am also interested in turbulence simulations, using state of the art computer codes on some of the world’s largest computers.

Another kind of instability that exists in the core of the tokamak is a neoclassical tearing mode (NTM). While usually not as violent as the ELM discussed above, it is still a concern for ITER because it causes a drop in  core plasma pressure, and therefore a reduction in the achievable fusion power. The instability arises because of a filamentation of the current density that flows in the tokamak plasma. This modifies the confining magnetic field over a narrow region in the vicinity of the filamentation. If the region affected by the NTM is narrower than 1-2cm (typically), the plasma is observed to heal the instability, and the filamentation is suppressed. We do not understand this mechanism (although we do have some ideas). When the affected region is larger, the temperature and density gradients are removed from that region, causing the drop in the core plasma pressure discussed above. In that situation, there is a positive feedback mechanism that amplifies the current filaments, causing the region affected by the NTM to grow, further amplifying the filaments, etc. The result is that a very large region of plasma can become affected by the instability, resulting in a large drop in the central pressure. We are particularly interested in understanding this threshold between when the plasma heals the filamentation, and when it amplifies it. This is important because on ITER, it is planned to use microwaves to drive localised currents in the plasma, focused to cancel the filamentation caused by the NTM. This would cause the NTM to shrink; if it shrinks to less than the 1-2cm threshold width, then the plasma will heal it. Key questions are how much microwave power is required to do this, and how localised must it be deposited in the plasma? If we can understand the threshold physics, then we can predict the threshold width of the region for ITER, and so quantify the microwave power required.

Construction of a prototype fusion power station will require the verification of materials and components in a fusion neutron spectrum. Ideally, this requires a small, compact fusion neutron source. I am interested in whether such a neutron source can be developed based on the so-called spherical tokamak concept. Pioneered on the START spherical tokamak at Culham, the UK presently has a world-leading spherical tokamak called MAST. There are challenges, but it appears that it might be possible to design a fusion components test facility with a similar size to MAST, but with much higher heating power, magnetic field and current. A key issue is whether the plasma turbulence can be controlled. 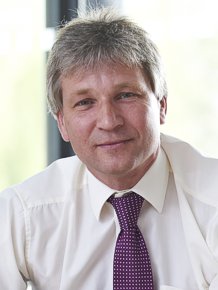