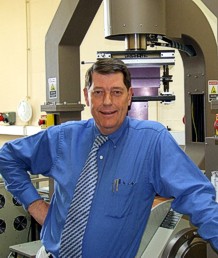 Due to the fact that strong magnetic effects require a material with significant order in principle there is no such thing as a magnetic liquid. However because of the net moment on certain atoms and ions many solutions exhibit magnetic effects but very weakly. Strong magnetic liquids can only be produced by either making a true colloidal dispersion of magnetic nanoparticles in a liquid or creating a semi-stable mixture of larger particles in for example an oil. Both classes of material exist. In particular the properties of a truly colloidally stable system commonly known as a ferrofluid are very unusual if not bizarre. In such a liquid the particles cannot be removed from suspension by a magnetic field and the ferrofluid behaves as a homogeneous entity. This means for example that additional forces other than gravity can be placed on the liquid such that materials with a significant greater density than the fluid itself can be made to float. Due to the divergence of B the liquid also exhibits bizarre properties because most liquids only experience a force due to gravity which is generally uniform across the vessel which contains them. We now have a liquid which requires no vessel to contain it but only a magnetic field gradient. It is then possible to create applications such as rotating shaft seals and ferrofluids are used in almost all loudspeakers to conduct heat away from the voice coil. Hence they are used in domestic environments. Because the liquid is homogeneous and magnetically strong it is possible to create cavities within it such that a strong Lorentz cavity field results again leading to some unusual and very visual effects.

For the second class of magnetic liquid known as magnetorheological fluids the larger size particles (approximately 1μm) are designed such that the application of a magnetic field leads to dramatic changes in rheology. Such fluids have applications in damping devices particularly in military environments but increasingly in domestic motor vehicles. They are also proposed as devices that could be used for example to stabilise vibration in buildings and for noise suppression e.g. on large ocean going vessels.

In this colloquium all of the above phenomena will not only be described and explained at an accessible level but additionally all the effects will be demonstrated live during the lecture and can be handled by the audience.

This is a free event for staff and students at the University of York. If you are planning to attend please register via Eventbrite as this will help us with organising mulled wine and mince pies which we would love you to join us for after the event!