A recent paper in Nature Communications shows how the transport of a laser-driven relativistic electron beam in dense matter is improved when imposing a strong magnetic field. 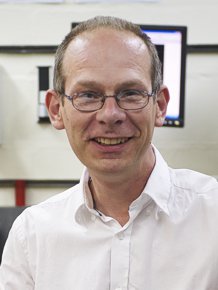 The technique reduces the large divergence of the electron beam, an intrinsic problem associated with how the laser generates the beam. The development is important to a number of applications including the study of inertial confinement fusion, warm dense matter and the acceleration of protons and heavier ions. The paper, entitled “Guiding of relativistic electron beams in dense matter by laser-driven magnetostatic fields” was published on 9th January 2018. The international team from France, Spain, Germany and UK included Rob Crowston and Prof Nigel Woolsey (pictured left) from the Department of Physic's York Plasma Institute.

The approach uses a novel technique entirely based on the laser-plasma interactions to deliver strong magnetic pulses (above 500 T) to reduce the laser-drive relativistic electron beam divergence and to achieve a five-fold improvement in energy-density. Transporting relativistic electron beams and increasing the energy-density better enables us to create matter at extreme conditions and mimic conditions similar to those found in the stars or in the planets’ interiors. There are likely to be opportunities to improve laser-drive proton and ion sources too, and is important for fundamental science studies as well as applications in industry and medicine.