12C + 12C fusion in massive stars could be slower than expected 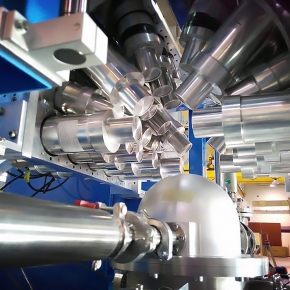 The number of fusion reactions that are critical for astrophysics is scarce. Among these, the fusion of carbon (12C + 12C reaction) is essential to the life cycle of massive stars and may occur at different stages of stellar evolution: explosive scenarios like Type Ia supernovae which can be used as cosmological standard candles, quiescent carbon burning in the contracting core of a massive star at temperatures of the order of 1 GK, and densities above a million g/cm3 and possibly in superbursts of x-ray binary systems.

Nuclear reactions taking place in stars can be reproduced in the laboratory but it is very challenging to do so because the probability for fusion is so low at the relevant energies. The approach usually taken is to measure the fusion probability at higher energies and extrapolate down into the astrophysically relevant energy window — known as the Gamow window. While most reactions involving fusion of heavy ions like carbon show a smooth variation in cross section as a function of energy and can be readily extrapolated, the 12C + 12C cross section has a whole series of resonances in the cross section around the Coulomb barrier that continue down to the lowest collision energies accessible experimentally.

Measurements of the 12C + 12C reaction at low energies have been made in the past which rely on detecting either charged particles or gamma rays emitted following fusion. Each technique suffers from complications and systematic error.

Professor David Jenkins of the Nuclear Physics Group has worked with Professor Sandrine Courtin of IPHC Strasbourg (and also an honorary Professor in the Department of Physics) to build a dedicated system called STELLA which can measure charged particles and gamma rays from 12C + 12C fusion in coincidence which removes all the systematic uncertainty in earlier measurements. The experiment was mounted at the Andromede accelerator at IPN Orsay and ran for a total of 12 weeks of beamtime. With these very long running periods, it was possible to make a measurement at an energy corresponding to the conditions in the most massive stars.

This work has been recently published open access in Physical Review Letters.