Attendees from across Chemistry, Physics and Biology departments convene for talks presenting research in which light is used to measure, manipulate or interact with biological systems. 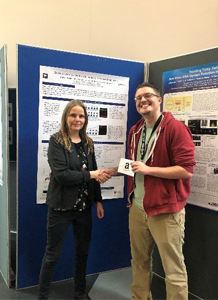 On Wednesday 29 May 2019 the BPSI Spring Symposium brought together 47 attendees from across Chemistry, Physics and Biology departments for a series of talks presenting research in which light is used to measure, manipulate or interact with biological systems.

The keynote presentation from Steve Meech (University of East Anglia) described the use of ultrafast time resolved infrared spectroscopy of light activated proteins. This theme was maintained by a second invited speaker Alex Jones (NPL) who gave a wide-ranging talk beginning from the photophysics of vitamin B12 to B12-based optogenetic applications. Our third invited speaker, Helen Bryant (University of Sheffield) described work developing and using photodynamic therapy agents using transition metal-based compounds, which provided a nice balance of scientific and clinical perspectives.

A nice selection of 13 contributed posters prompted much discussion during the coffee breaks and after the talks, with a poster prize (awarded by the invited speakers) being won by Stephen Thorpe with a poster entitled ‘Electrophotonics: Multimodal Sensors for Sepsis Diagnostics’.