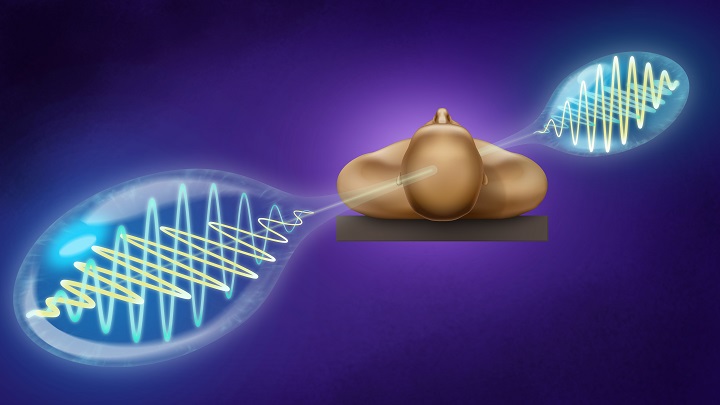 Using quantum entanglement information for higher energy radiation such as gamma photons is, comparatively, a field in its infancy. However, higher energy entangled photons open up new applications, due to their ability to penetrate through significant thicknesses of material (e.g. in medical imaging).

The team developed a new simulation which includes the "spooky" action-at-a-distance effects between the two gamma photons used in positron emission tomography (PET) medical imaging. The new simulation was benchmarked to experimental data, using a PET demonstrator constructed from state-of-the-art semiconductor gamma detectors supplied by Kromek group (Durham, UK). It was confirmed that the simulation including quantum entanglement could accurately describe the data, whereas conventional PET simulations could not.

Subsequent simulation of a larger PET system indicated that the quantum entanglement between the PET photons creates new possibilities for imaging. These include the possibility for the true PET image to be disentwined from the noise arising from unwanted backgrounds, such as where the PET photons scatter in the patient before detection. For some imaging scenarios this "noise" is comparable to the true PET signal and correction typically requires a prior CT scan of the patient and simulated noise correction. With quantum-entangled PET, the researchers show the feasibility for such information to be obtained from the PET data alone.

Following this proof-of-principle study the team is establishing how well the method performs in tandem with the standard PET image correction methods currently employed. They are also working with the University of Western Cape and the University of Zululand in South Africa to explore prospects for exploiting quantum entanglement to develop more accessible PET machines and are planning fundamental tests of quantum entanglement in the high energy regime.

Professor Dan Watts from the Department of Physics at York, who led the project said: "Quantum entanglement is a fascinating phenomenon which probes into the nature of reality. It was a pleasure to work with such a great team to enable its detailed study in this higher energy regime and to explore its utility in medical imaging."

The PhD student on the project (Ruth Newton) said: "This is an exciting new advance that really showcases how quantum entanglement can have practical applications in other areas, such as commonplace medical procedures."

Research Associate Dr Jamie Brown said: "We hope that this innovative application of well established quantum mechanical principles can have a significant real-world impact on the diagnosis and treatment of diseases such as cancer and may open the door to a new era of medical imaging techniques."

Dr Julien Bordes, RSE/PDRA: "We anticipate that the innovative simulation software developed for this project will be a key underpinning technology for various quantum entanglement-based societal applications, beyond PET."

Professor David Jenkins, head of the nuclear physics group at York, who was not directly involved in the work, said: "This landmark study shows that quantum entanglement, an esoteric feature of the microscopic world described by Einstein as 'spooky action at a distance', could play a key role in advancing the development of medical imaging technologies for the future."

The paper, “Photon quantum entanglement in the MeV regime and its application in PET imaging" is published in the journal, Nature Communications.