Can N=Z nuclei tell us about new forms of pairing?

New research led by the University of York may shed light on how neutrons and protons pair together in nature. 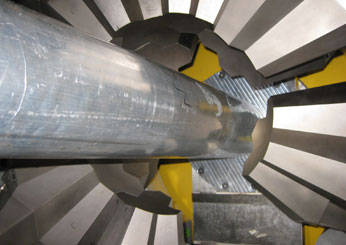 It is known that proton pairs and neutron pairs exist in atomic nuclei, but for many years scientists have predicted that neutron-proton pairing should also occur, and in a specific way that can only exist for that type of pair. A recent experiment performed at the National Superconducting Cyclotron Laboratory (NSCL) at Michigan State University, indicates that this may be the case.

While measuring the mean lifetimes of the first excited rotational states for three exotic nuclei that contain equal numbers of protons and neutrons - 38, 39, and 40 - PhD student Ryan Llewellyn, from the Department of Physics, was surprised to find that the decay strength found for the nucleus with 39 protons and neutrons was about half the value of that in the neighbouring nuclei with 38 or 40 protons and neutrons. A possible explanation for this effect may involve neutron-proton pairing between the odd neutron and odd proton.

Llewellyn, supervised by Professors Mike Bentley and Bob Wadsworth, said: “These results are the product of over three years of analysis and may provide an indication that neutron-proton pairing does indeed occur in nature. This research opens a gateway to further investigations with heavier nuclei over the next few years to observe whether there is a continuation of this effect. Ongoing developments in nuclear theory here in York aim to provide an answer as to the origins of this phenomenon.”

Current state-of-the-art nuclear model calculations, which do not yet contain this new type of pairing, cannot reproduce the experimental observations. A new advanced modelling of the neutron-proton pairing phenomenon is now being actively pursued by Professor Jacek Dobaczewski’s group at the University of York.

The paper 'Establishing the maximum collectivity in highly deformed N=Z nuclei' is published in the APS Physics, Physical Review Letters.