Researchers ‘tune in’ to atoms to detect impurities

Scientists and engineers working at the frontier of nanotechnology face huge challenges. When the position of a single atom in a material may change the fundamental properties of that material, scientists need something in their toolbox to measure how that atom will behave. 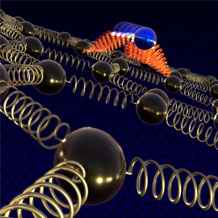 An international research team, including an academic at York, has developed a new technique based on the principle of a musical tuning fork, to monitor the behaviour of atoms in solid materials. The researchers have shown for the first time that vibrational energy, similar to that produced by a tuning fork, can be used to detect different ‘sounds’ in atoms.

The technique used by the researchers involved firing a beam of electrons at a single atom in a solid, causing it and the atoms that surround it to vibrate. The technique creates a unique vibrational energy fingerprint, similar to the fixed tone from a tuning fork, which can be recorded by an electron microscope. But if a single atom impurity is present - another chemical element, for instance - the vibrational energy fingerprint of that impurity will change: the material will 'sound' different at this precise location.
Using this technique the team was able to differentiate the vibrational signal from a single impurity atom of silicon in a large graphene crystal (a form of carbon only one atom thick).
The research opens up the possibility that scientists will be able to monitor materials for atomic impurities.

The work was carried out at the SuperSTEM Laboratory, the UK National Research Facility for Advanced Electron Microscopy, supported by the Engineering and Physical Research Council (EPSRC), and is administered by six UK universities, including the University of York.

Dr Demie Kepaptsoglou from York’s Department of Physics and a staff scientist at SuperSTEM was part of a team from the University of Leeds, Oxford and the Sorbonne University in Paris to carry out the research.

Dr Kepaptsoglou said: “This is a breakthrough. The detection of the vibrational signature of a single atom has long been predicted, but we now have the tools to observe it experimentally. Being able to study the vibrational characteristics of materials at the atomic level is extremely important in physics and materials science.”

The animation created by Dr. Kepaptsoglou illustrates schematically how the silicon vibrates, and how that vibration begins to affect neighbouring atoms, and is inspired by extensive theoretical calculations by the team at the Sorbonne University, who collaborated on this project.
The findings, Single Atom Vibrational Spectroscopy in the Scanning Electron Microscope, are published in the journal Science.