Host of the astronomy podcast Syzygy comments on what to expect from January's total lunar eclipse. 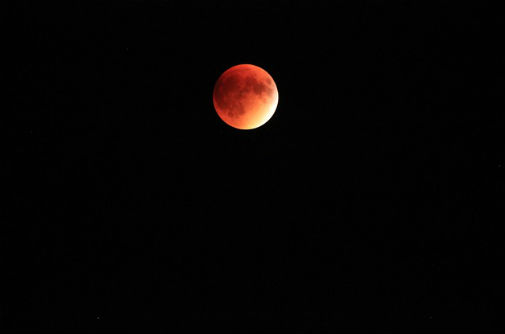 Dr Emily Brunsden, Director of the University of York's Astrocampus, said: “In the early hours of Monday morning (21 January) the full moon will be quietly changing. It will slowly be eaten away by shadow, turn a rusty blood red, then calmly grow back to its former self.

“Known as a blood moon, this is a total lunar eclipse. The Moon moves into the shadow of the Earth, which means we see the surface shrink away.

"At maximum eclipse the only light that reaches the surface is that which passes through our atmosphere. Our atmosphere scatters blue light (making the sky blue) so only the red light passes through and lights up the Moon, making it appear a rusty red colour.

“The eclipse will officially start at 2.36am but the best viewing will start from 3.33 am when the Moon will be high in the south west. The dimming will look a bit like the Moon is changing phase from full to crescent shaped over the next hour.

"At 4.41am the full eclipse starts and the Moon will start to turn red, reaching a maximum at 5.12am. The redness reduces until 5.43am when the Moon starts to leave the shadow and grow from a white crescent back to its full shape, returning to normal at 6.50am.

“As with stargazing the darker the location you are viewing from, the better, but the Moon is super bright so even those in cities will be able to see the eclipse occur.

"Viewing is likely to be easier earlier in the eclipse as from around 5am the Moon will be starting to head lower in the western sky. If you have a clear view of the south-west horizon this won't be a problem.

“I really love eclipses. There is something captivating about being able to see the silent motion of the Moon in real time, reminding us of our dynamic Solar System. We usually only get the chance to see one or two per year-special reminders of our place in the Universe.”

For more on the wonders of the Solar System, listen to the Syzygy podcast series with Dr Emily Brunsden and Dr Chris Stewart.