The Department has moved up to 2nd for 'Career after six months' in 2019 Guardian University Guide. 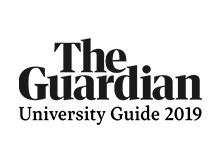 The Department of Physics is ranked 2nd in 'Career after six months' in the UK in the Guardian University guide 2019. This week the department confirmed its place among the UK’s most highly regarded departments for percentage of graduates who find graduate-level jobs, or are in further study at professional or HE level, within six months of graduation. The significant rise from last year is thanks to the excellent work of the White Rose Industrial Physics Academy (WRIPA) and the Careers Liaison Officer.

The rankings are based on official data collected by the Higher Education Statistics Agency (HESA) and the National Student Survey, published by HEFCE.