To mark International Women’s Day, leading physicists from the University of York and five other top universities are encouraging their colleagues across the country to do more to reduce the gender disparity in physics. 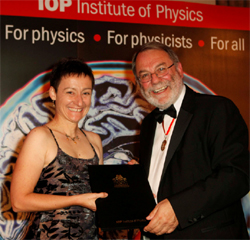 ‌In a new video launched today (8 March), the six physics departments – who have all been awarded Institute of Physics’ (IOP) Juno Champion  status for their efforts to overcome barriers to women in the subject – explain how their involvement in Project Juno has led to better working environments for all staff, regardless of gender.

The IOP published research last October showing that 49 per cent of all co-educational maintained schools in England did not send any girls on to do physics A-level in 2011. Further along the academic career path in physics, only 19 per cent of researchers, 15 per cent of lecturers and 5.5 per cent of professors are female.

The IOP is working to overcome the shortage of women in the subject through Project Juno.

The University of York received Juno champion status in October 2011.

Dr Irene D’Amico, Chair of the Department of Physics’ Departmental Equality Committee, who features in the Juno video, said: “In York the journey towards achieving Juno Champion status has promoted widespread awareness of the problem of under-representation of women in physics. We made a critical assessment of our culture and practices, realising that parts were already very good, but also accepting that some needed modifying.

“The journey continues through our structured action plan to address gender imbalances. Tapping into the full brain-power of the country – including men and women equally – will help in improving our future.”

To read the full story and watch the video visit: http://www.york.ac.uk/news-and-events/features/juno/