The first dedicated international conference on the subject of Optical Angular Momentum (ICOAM), held at the University of York on 23-25 March 2010, was a great success.  Following the conference, Cambridge University Press has commissioned co-chairs Professor Mohamed Babiker of York’s Department of Physics and Professor David Andrews of UEA to edit a book.  A special issue of the Journal of Optics is also being produced.

The subject matter of the conference was the angular momentum associated with certain types of light (laser light with a ‘twist’) and its potential applications in a wide variety of contexts including physics, astrophysics, biology, and chemistry.  The conference attracted nearly 100 delegates from around the world, and numerous contributors of international renown.

Highlights of the conference included:-

The conference also gave rise to new possibilities for research collaborations, including a potential project with a Japanese group in which Professors Babiker and Yuan of the Department of Physics are to investigate new avenues for the application of particle beams carrying orbital angular momentum in the areas of condensed matter and nanophysics.

Many other new developments, some of fundamental nature, were presented at the conference by prominent scientists, such as Professor Sir Michael Berry of the University of Bristol. 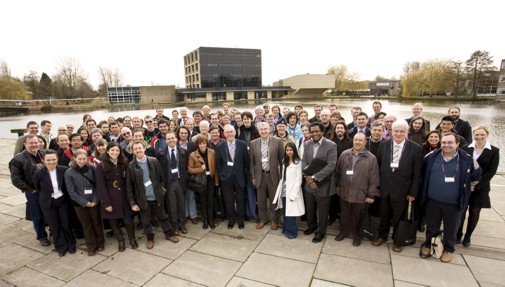 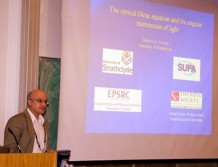 “I would like to thank you again for inviting me to York.  The conference was fantastic!” (Professor Halina Rubinsztein-Dunlop, of the University of Queensland, Brisbane, Australia)

“Let me express my joy over having participated in the ICOAM.  It was a really good conference.  Excellently organised.” (Professor Bo Thidé of Uppsala University, Sweden)

“A fine conference.  I am looking forward to seeing a fine book.” (Professor Les Allen of the University of Strathclyde, Glasgow)