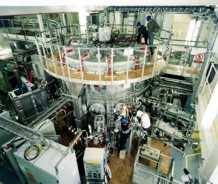 York's Plasma Physics and Fusion Group has been awarded an EPSRC grant for research on “The interaction of transport and reconnection in high temperature plasmas”. This grant, with a value of over £600k and led by Dr Kieran Gibson, will fund a three-year experiment and theory programme on a particular plasma instability known as a Neoclassical Tearing Mode (NTM). This instability is an important issue for magnetically confined fusion devices as the magnetic field line reconnection processes associated with it degrade the plasma confinement and can limit the fusion power.

Dr Gibson’s research programme, supported by theory work led by Professor Howard Wilson, will study the effect of NTM instabilities on the temperature and density of the plasma using the new Thomson Scattering system on the MAST tokamak, an instrument partly funded by York University (see http://www.york.ac.uk/news-and-events/news/2009/fusion-energy/). Such work will allow tests of models of the thresholds at which NTMs grow (an important issue for the ITER fusion device) but can also give an insight into the fundamental physics of heat and particle transport in magnetised plasmas and the relationship between transport and reconnection in hot plasmas.