York’s fusion energy experts are to develop a new flagship project with their counterparts in Zhejiang University, China, following a joint fusion seminar held in Zhejiang on 12-13 April.

The ambitious project, to build a state-of-the-art kinetic tokamak plasma edge turbulence and eruption code, will cement the relationship between the two fusion energy groups and enhance the international profile of both.

Professor Howard Wilson and Drs Kieran Gibson and Ben Dudson, of the Plasma Physics and Fusion group, travelled to Zhejiang as part of the Vice-Chancellor’s visit to China in April.  Two days of seminars and discussions led to many areas of common interest being identified, and plans for the next year include collaborative theoretical and experimental work to take place in York, and a further visit to Zhejiang by Prof Wilson and Dr Dudson to initiate the flagship project.

York has the biggest university fusion energy research and education group in the UK. While that of Zhejiang was formed only two years ago, its dynamic, internationally renowned leadership and plans for rapid growth make for an exciting partnership.  Europe and China (along with 5 other nations) are partners in ITER, the €10Bn international collaborative project that will explore the potential of nuclear fusion as a safe, affordable, limitless and carbon-neutral source of energy for the future.

Prof Wilson and Drs Gibson and Dudson followed their visit to Zhejiang with a visit to one of the two main Chinese Government fusion research centres in Hefei, which hosts their main fusion experimental device, called EAST. 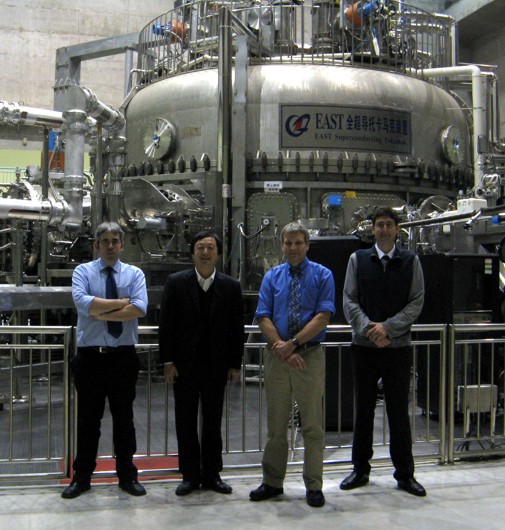