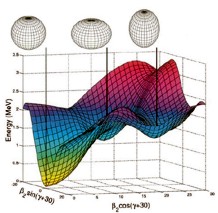 A recent publication relating to the study of the very exotic lead nucleus, Pb-180, is presently the main feature article on the Physical Review C website with a synopsis written by the eminent Yale nuclear physicist, Rick Casten:

This experimental study was led by Dr David Jenkins and comprised a collaboration of experimentalists from York, Liverpool and the University of Jyvaskyla in Finland with theory support from theoreticians in France and Belgium. Pb-180 is the most exotic lead nucleus which has ever been studied. It has twenty-eight neutrons less than the main stable isotope of lead, Pb-208 and is extremely hard to produce. In a one-week experiment at the University of Jyvaskyla only about 300 nuclei of Pb-180 were produced from the intense bombardment of a target of Mo-92 by an accelerated beam of Zr-90. The motivation for the experiment is understanding how such an exotic lead nucleus can change its shape from spherical to deformed (rugby-ball shape) for a small cost in energy (see picture). This provides a stringent test of nuclear models at the limits of the existence of exotic nuclei.