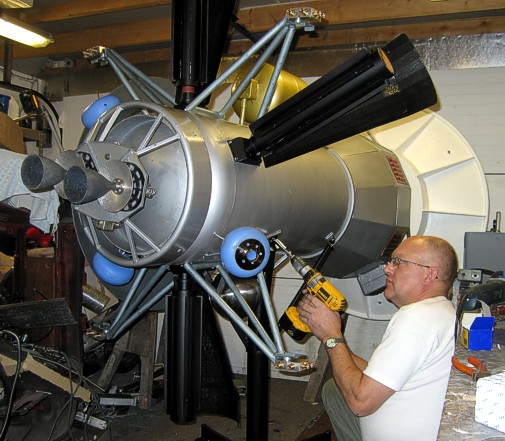 Dave Coulthard, Research Services Manager in the Physics Department, has been awarded the MBE in the 2010 New Year’s Honours list.  The award, for services to science education and public understanding of science, recognises Dave’s extensive contributions to the University and to school and public science activities in York.

Dave was instrumental in setting up an after-school science club at Knavesmire Primary School in the mid-1990s.  He headed up the club for some four years, arranging speakers, tours, experiments and activities and inspiring children to see science as an interesting and exciting topic.  Dave’s contributions to the Knavesmire Primary School also include an Island Garden, outdoor gallery and wildlife garden.

In the later 1990s, Dave masterminded an application to the Millennium Commission for funding to create a scale model of the solar system along the York to Selby cycle route.  Together with Dr Peter Thompson of the Department of Psychology, and Willie Hoedeman, Dave brought this project to fruition, building all nine planets himself and leading to the instigation of an annual “Solar System Cycle Ride” which is enjoyed by colleagues, students and members of the local community.

Dave also collaborated with Peter Thompson to secure funds and co-ordinate arrangements for a sculpture (the “Fisher of Dreams”) to be installed on a bridge over the York-Selby cycle route, and single-handedly created a scale model of the Cassini-Huygens space probe now installed close to the cycle route’s model of Saturn (the planet around which Cassini orbits).

In addition to his voluntary work, Dave’s contributions to the life and work of the University over the last 36 years – including the establishment and maintenance of the Vickers instrument collection in the Physics department – reflect his own commitment to the world of science, outstanding technical abilities, and immense personal energy and enthusiasm.  He is currently involved in the Physics department’s initiative to develop a new “Astrocampus” at the University, to bring astronomy, astrophysics and related subject to schools and the community.