Astronomy Event at the Department of Physics 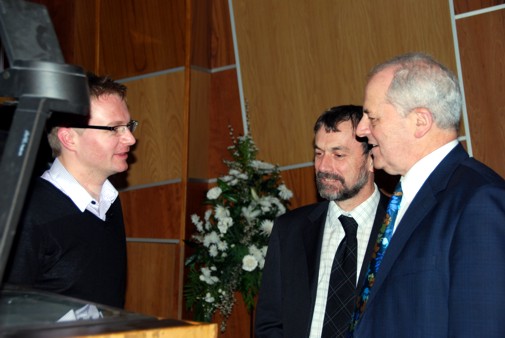 The special astronomy celebration event hosted by the Department of Physics (organised by Dr David Jenkins) on 27 January 2010 was a resounding success, attracting enthusiastic feedback from both invited guests and members of the public. Astonishingly, after a grey day the clouds cleared in the evening to allow those at the event to enjoy viewings of the night sky at the "star party".

The focal point of the day's event was a public talk given by Dr Marek Kukula of the Royal Observatory in Greenwich, introduced by the Vice-Chancellor Professor Brian Cantor. The talk had been fully booked from several days beforehand, and Dr Kukula addressed a 300-strong audience in a packed lecture theatre. Entitled "Universe", Dr Kukula's talk gave an illustrated guide to some of the latest findings in space, including exploding stars, a moon where liquid methane rains from orange clouds, and a monstrous black hole at the centre of our galaxy. One visitor commented, "Dr Kukula's fascinating talk was a brilliant climax to what, for my wife and me (and many other people) will remain an evening we will not soon forget".

The lecture audience included a group of 42 schoolchildren from across Yorkshire, who had enjoyed an exciting afternoon of astronomy-related activities beforehand, including building spectroscopes and visiting the University Observatory. The schoolchildren's visit was organised by the University's Excellence Hub.

From 4pm that afternoon, before and after the public talk, a range of activities were open to the public in the Department of Physics, including a giant inflatable planetarium with tour of the night sky, a 3D show entitled "Bigger than Big" involving a flight through the universe, and remote-controlled robot models of Martian Rovers. Honorary Visiting Professor Linda French of Illinois Wesleyan University in the USA, also gave a talk and slide show called "What's up tonight?" pointing out what objects could be seen in the sky that night. The Vickers Collection of historic telescopes and instruments was also open for public viewing in the Physics Department foyer.

After the lecture, around 100 people participated in a "star party" at the University Observatory and around the Department of Physics, observing the night sky using telescopes brought in by the York Astronomical Society as well as those at the observatory. Mars was at its brightest for two years on the night, the moon was a few days off being a full moon, and the constellation of Orion and its nebula were also of interest.

The Department would like to thank its collaborators outside the University - Dr Marek Kukula our speaker, Richard Everiss (3D show), Martin Lunn (Star Dome), Keighley Star Centre (Martian Rovers), Professor Linda French, and the members of the York Astronomical Society who brought their telescopes and assisted guests with their use. The success of the event was attributable to the support of all those who contributed, not least our own Physics students (and one from Chemistry!) who manned the exhibits and welcome desk, took tours to the observatory, and acted as hosts to the visiting public. 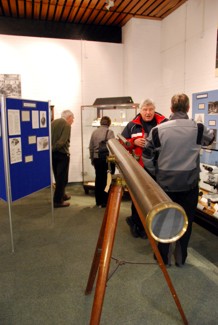 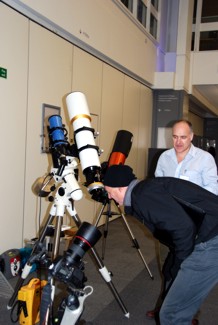 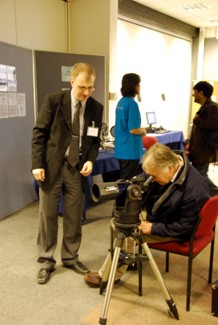