Plans to develop the area around the University Observatory into an “Astrocampus” will move ahead this autumn following the granting of planning permission by York City Council. This has been made possible by the release of nearly £100k to the Astrocampus project.

The Astrocampus in its initial form will be a large fenced and secured enclosure surrounding the present observatory site, with improved drainage and provision of hard standing. A new rolling-roof observatory will be provided on the site with piers to mount a range of telescopes. This new observatory building will also contain a warm room where people can relax and warm up during their observations. In addition to the basic infrastructure, a substantial amount of money has been spent on new equipment, from top-of-the-range CCD cameras and solar telescopes to new computers and astronomy software. A superb job has been done by undergraduate students working over the summer who have been involved in testing the equipment and making new scripts and demonstration videos.

The Astrocampus will greatly improve the scope for observation work, not only for students taking the Physics with Astrophysics degree degree option but also for other Physics students and members of the University's astronomy society, Astrosoc. Importantly, it will allow the Physics Department to expand its outreach work with schoolchildren and the general public, and will provide a focus for new public engagement opportunities. As a fun and informative side of this project, the department has obtained an inflatable 5-m "Cosmodome" which can show movies and star chart projections. The shows in the Cosmodome can be readily tailored to different audiences.

The image shows a model of the Astrocampus made by the Physics Department's Research Services Manager, Dave Coulthard MBE. 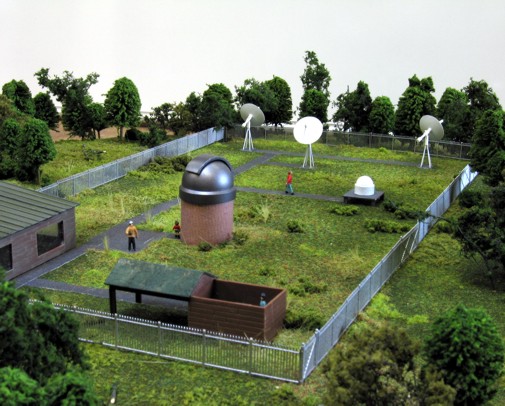