I studied philosophy here at York a long time ago, being taught by, among others, Tom Baldwin and Andrew Ward.

Later, but still a long time ago, I did research work at UC Santa Barbara. My supervisor there was Nathan Salmon. I’ve taught in both places, still teach at one of them, and have taught as well as St Martin’s College, Lancaster, Lancaster University, University of Leeds and the Open University.

I wrote my dissertation on Hume, and for some years my primary interests were in epistemology and history of philosophy. But though I am still interested in Hume, both as a man and a philosopher, I began to develop interests elsewhere, reading and being utterly captivated by Parfit’s Reasons and Persons and thereafter wanting to pursue an interconnected range of contemporary philosophical problems.

So current concerns are with the theoretical side of applied ethics – questions about the values of life and death, the nature of a person, animal minds, and so on – and with related questions in aesthetics, metaphysics and environmental philosophy.

I enjoy teaching, and giving talks to, a wide variety of audiences including students, academics, schoolkids, as well as various gatherings of people in the wider world.

In recent years I’ve taught modules on the value and meaning of life, life and death, and environmental philosophy. 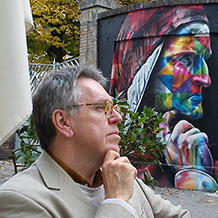