The third Iberian Symposium on Geometric Morphometrics will take place at the University of Girona from the 9-10 June 2017. 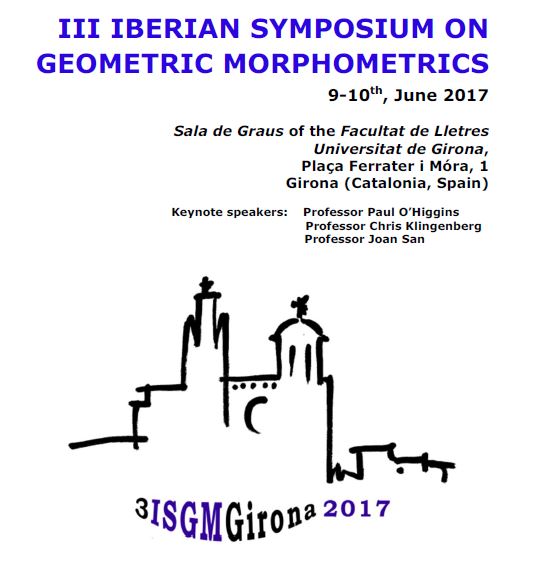 The two previous Iberian Symposia on Geometric Morphometrics took place in Sabadell (Barcelona) at the Institut Català de Paleontologia and in Madrid, at the Universidad Autónoma de Madrid (Autonomous University of Madrid). We now have the pleasure to inform you that the third in this series of meetings is going to take place at the Universitat de Girona (University of Girona) in Girona (Catalonia, Spain) on the 9th‐10th of June, 2017. The meeting is organized by Carme Rissech, Pere Boades, Anna Carreras, Judit Homs, Francisco Reina, Joan San, and Enric Verdú from the Grup de Recerca d'Anatomia Clínica, Embriologia i Neurociència (NEOMA), with the support of the Departament de Ciències Mèdiques (Department of Medical Science) and the Facultat de Medicina (Faculty of Medicine) of the Universitat de Girona. The aim of the meeting is to provide a platform to promote the dissemination and exchange of knowledge among researchers and scholars, who are interested in the application of geometric morphometrics in their analyses. This conference is aimed at all those professors, researchers, professionals and students in any field of science, who are interested in the application of geometric morphometric within their scientific studies.

This congress is expected to be a meeting point for the GM community of the Iberian Peninsula for discussing all the applications, doubts and aspects of this fascinating method. We hope that many people come to present their research and to grow our network. We look forward to welcoming you at the Sala de Graus (Degree Room) of the Facultat de Lletres (Faculty of Arts) in the in the heart of Girona.